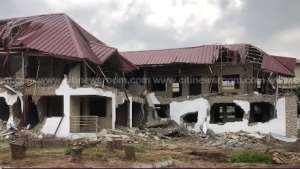 The Chief Executive Officer of Citi FM and Citi TV, Samuel Attah-Mensah has called for a proper probe into the circumstances surrounding a seeming confusion over ownership of a parcel of land upon which the demolished structure belonging to the Nigerian High Commission in Ghana stood.

He says the Lands Commission officials found complicit in the act should be arrested.

The parcel of land, said to be owned by the Osu Stool and leased to the Nigerian High Commission in the year 2000, is allegedly being forcibly taken over by a private interest person with the knowledge of the Lands Commission.

The demolition of the uncompleted structure caused Ghana a great diplomatic ruckus.

Two persons have so far been arrested in connection with the demolition and the Ghanaian Government has promised to reconstruct the structure.

But Mr. Attah-Mensah, speaking on Citi TV's news analysis show; What The Papers Are Saying, said the offending officials should not be left off the hook.

“The Lands Commission should be blamed in this whole game. Two people have been arrested [by the Police over the issue]. I think they should go to the Lands Commission and arrest those who renewed the mandate in 2019 because they are hiding there and watching unconcerned but they know what they have done,” Mr. Attah-Mensah said. Background

Parts of the one-storey structure belonging to the Nigerian High Commission in Ghana, located at Osu Ringway in Accra were destroyed on Friday, June 19, 2020.

The Osu Stool which took responsibility for the demolition accused the Nigeria High Commission of trespassing on its land.

The Stool in a statement said the Nigerian High Commission has no legal title to the land.

“There has till date been no response or acknowledgement in response to the stool's invitation nor has the trespasser proceeded to submit any documentation of permission upon which it demolished the original structure on the land and proceeded to erect a new structure,” the statement added.

“It is known by the Osu Stool that the trespasser till date does not hold in its possession any documentation on the parcel land.”

But the Nigeria High Commission insists that it has legal documents that the land in question belongs to it.