French doctor who championed hydroxychloroquine to explain his actions to lawmakers 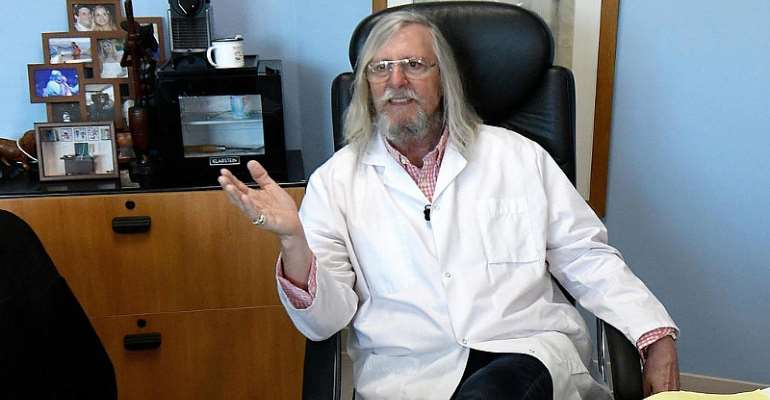 French doctor and virologist Didier Raoult, whose use of malaria medication hydroxychloroquine at a treatment for Covid-19 has attracted worldwide attention and controversy, was to respond to questions of a parliamentary committee investigating France's response to the epidemic.

The inquiry of 32 lawmakers from different political parties was launched last month to “learn lessons” about France's handling of the Covid-19 epidemic.

After looking into face masks, the panel was to turn to hydroxychloroquine, a malaria medication championed as a treatment for Covid-19 by Raoult, who was to respond in late afternoon.

“What we want to understand from Mr. Raoult is how he managed to follow a policy of mass testing in Marseille”, a city which had “mortality rates well beneath” those elsewhere in the country, said right-wing lawmaker Damien Abad on Tuesday.

Raoult, who heads the infectious diseases department of the university hospital in Marseille, became widely known to the public inside and outside France by promoting hydroxychloroquine as a treatment for Covid-19 in late February, just before the epidemics were taking off in Europe.

He has proved a divisive figure in media, cultivating a shaggy-haired, anti-establishment persona with a penchant for controversial remarks, claiming in early February the coronavirus was “not so mean” and subsequently assuring there would be no second wave of infection.

Hydroxychloroquine
Raoult's claims about hydroxychloroquine are derived from two small studies combining the derivative of the chloroquine molecule, used to treat lupus and malaria, with antibiotic azithromycine.

The doctor said in late February the drug was “probably the least expensive and simplest way to treat the coronavirus”.

The claims have met with mixed reviews among scientists and health officials, with some heaping praise on Raoult and others objecting that the molecule's efficiency has not been proven and that it could engender dangerous side effects.

United States President Donald Trump and Brazilian President Jair Bolsonaro have defended the medication and Trump once declared he was taking hydroxychloroquine as a preventative measure.

French President Emmanuel Macron said he was “convinced [Raoult] is a great scientist” after meeting the doctor in early April and called on rigorous trials of the treatment.

But France banned use of the drug as a treatment for Covid and the World Health Organization (WHO) suspended trials in May, following the publication of a study in medical journal The Lancet that suggested hydroxychloroquine posed risks of heart problems.

But the WHO reversed its decision after experts poured doubt on the findings and the journal withdrew the study when its authors declined to provide its data sets.

Remarks
Raoult has continued defending the treatment in the days leading up to his appearance before the inquiry.

“I treated more than 3,700 patients with this medication, with 0.5 percent mortality and no cardiac toxicity,” he told Le Parisien newspaper in an interview published Tuesday. “What more do you want?”

Raoult also said he believed a large part of French citizens are already immune to the disease caused by the new coronavirus.

“My hypothesis is that part of the population was naturally immunised against Covid before the start of the epidemic,” he told newspaper Le Parisien, but said he had no idea why there seemed to be an estimated “40 to 70 percent” rate of natural immunity.

“What is sure, is that by speaking about natural immunity, I'll be set on fire by the laboratories working on vaccines,” he told the paper.

In regards to efforts to develop a vaccine, Raoult expressed doubt: “It is statistically improbably that a vaccine will be available” at this point, he said.

On authors of two recent studies published in British review Recovery and French revue Discovery claiming the treatment is ineffective: “They are ignoramuses” who either gave patients too much or too little of the drug. “Had they asked my opinion, they might have been more effective,” Raoult said.

Asked about critics saying he published too often to be credible: “Do you ask Mozart did what he did? I'll add that in addition to 150 publications per year, I published 10 books at the same time. We are not all equal. In this country, we love to decapitate people.”