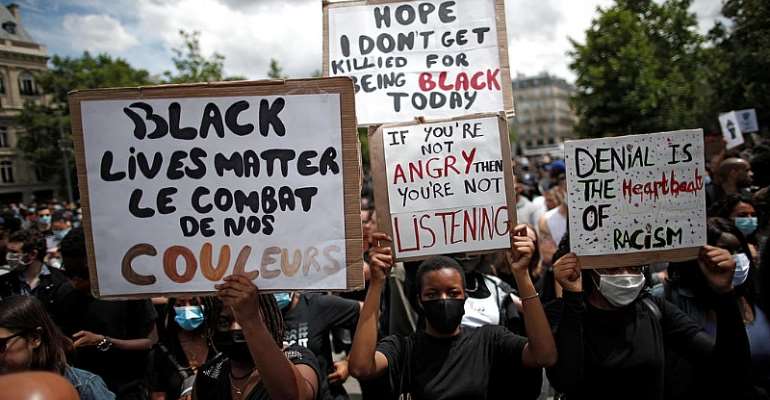 Thousands of people have turned out for fresh demonstrations against alleged police brutality and racism in central Paris and other major French cities. The protests come against a backdrop of mounting anger among police officers who reject the accusations.

Protesters gathered at Place de la République in Paris on Saturday to protest against alleged police brutality and racism.

The march, which is to head towards Opéra from 2:30pm, was organised by the Adama Traoré committee, created to call for justice for the young black man who died in police custody in 2016 in the Paris region.

"We call on all the cities in France to come and demonstrate with us to demand truth and justice for Adama and all the victims of the police or gendarmerie," the committee said.

The Adama committee drew some 20,000 people on 2 June to the Paris court, and has become the spearhead of the fight against police violence.

Its discourse has broadened from denouncing police violence to denouncing "systemic racism", finding a powerful echo after the death of George Floyd, an African-American killed on 25 May in Minneapolis by a white policeman, which sparked a worldwide wave of indignation.

Other marches for racial justice are planned in Marseille, Lyon, Montpellier, Nantes, Saint-Nazaire, Bordeaux and in Strasbourg on Sunday.

French police staged protests for a second day Friday, angry at accusations of racism in their ranks. They slammed top officials for failing to defend the force against the allegations.

Several dozen officers blocked traffic in a wildcat march down the Champs-Elysées avenue in Paris, carrying banners proclaiming: "No police, no peace!" and "The police aren't racist."

Border police at Orly airport south of Paris and officers in Bordeaux, Marseille and other cities threw handcuffs, armbands and other equipment on the ground while standing in formation, with many shouting for the resignation of Interior Minister Christophe Castaner.

Castaner infuriated officers this week with a pledge of "zero tolerance" for police racism after 20,000 people massed at the Paris courthouse on 2 June in an echo of the Black Lives Matter protests in America.

He also said police would no longer be allowed to use chokeholds to detain suspects, a move derided by many officers as an unfeasible concession that could make their jobs more perilous.

"The police are not racist... they save people's lives no matter the colour of their skin," Fabien Vanhemelryck, head of the Alliance union, told journalists on Friday.

"It's not just the interior minister... the president must make sure the police are respected," Vanhemelryck said.

Some police unions have threatened to carry out only minimal duties, since France forbids strike action by law enforcement agents.

President Emmanuel Macron could address the heightened tensions in a TV speech on Sunday evening.