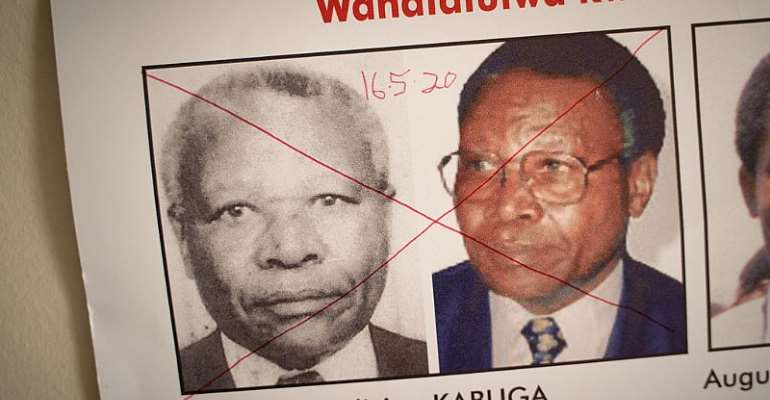 After the arrest of Felicien Kabuga in Paris on 16 May, several Kenyan families are seeking justice, accusing the top Rwanda genocide suspect of having a hand in the murder of their relatives while he was hiding out in Kenya.

In September 1994, months after the genocide, Felicien Kabuga is thought to have fled to Kenya under the protection of autocratic President Daniel arap Moi. He reportedly stayed in the country until 2012.

The controversial presence of the Rwandan tycoon, charged with financing the 1994 murder of 800,000 Tutsis and moderate Hutus, is believed to have led to the murder of several Kenyans.

After the 84-year-old's arrest on 16 May in Asnières-Sur-Seine, northwest of Paris, families of those allegedly killed in Kenya are hopeful that the highly-sought Rwandan genocidaire will also face justice for his actions in their country.

Lydia Wangui, 68, is a small scale subsistence farmer based in Nyeri, central Kenya, who for the past 17 years has being seeking justice for her murdered son William Munuhe.

On 20 January 2003, Munuhe's dead body, partially dissolved in acid was discovered at his home in Nairobi's exclusive Karen suburb. The former journalist, then aged 27, was thought to have been eyeing a $5 million reward the United States had offered for Kabuga's arrest a year earlier.

He had reportedly promised to lure the Rwandan to his house under the pretext of discussing a business deal and planned to deliver him to FBI agents whom he had contacted three days earlier.

“I feel a bittersweet relief that Kabuga has been caught," Lydia tells RFI as she gazes at a well-tended graveyard in her homestead where Munuhe is buried. "He will now face justice for the pain and anguish that he caused my family – and also to the people of Rwanda."

Munuhe's family has sought compensation from the Kenyan government for his murder and for denying that Kabuga was hiding in Nairobi, as well as for monies spent over the past 17-years pursuing justice for their son.

But he says the police also have questions to answer. "If the victim was working as an informer and had reported to the police that his life was in danger, they should have protected him. Otherwise, why did he take the risk of exposing himself to Kabuga?" Khamala asks.

There are many other relatives of Kabuga's Kenyan victims who are seeking justice.

Benjamin Mbiti Kalili, a telecommunications expert, seconded by the United Nations to the Tanzanian based International Criminal Tribunal for Rwanda (ICTR), was killed on 12 July 2003 by unknown people.

He was actively involved in another botched operation to capture Kabuga in Nairobi a month earlier.

Kalili's younger brother Francis says his sibling had told the family how the Arusha court had managed to locate Kabuga's hideout in Nairobi's Hurlingham estate, where a dawn raid was planned.

However, Kabuga was tipped off and slipped away moments before the arresting squad, including Kalili, arrived.

Another victim is Michael Sarunei, a soldier allegedly assigned to protect Kabuga, who disappeared on 13 February 2009, never to be found.

His family believes he was killed for secretly photographing the Rwandan fugitive while he was in a Nairobi hospital for treatment in 2008.

On 3 June, a French court ordered that Kabuga be handed over to the ICTR to face genocide charges. The 84-year-old could be transferred to The Hague before a trial in Arusha, Tanzania.

His lawyers have objected to the transfer due to his frail health. They also say he will not receive a fair trial at the tribunal, and have called for a domestic trial in France, which has already tried and convicted three Rwandan genocide suspects.

Kabuga can still appeal the extradition ruling by challenging the validity of the 1999 arrest warrant issued against him.