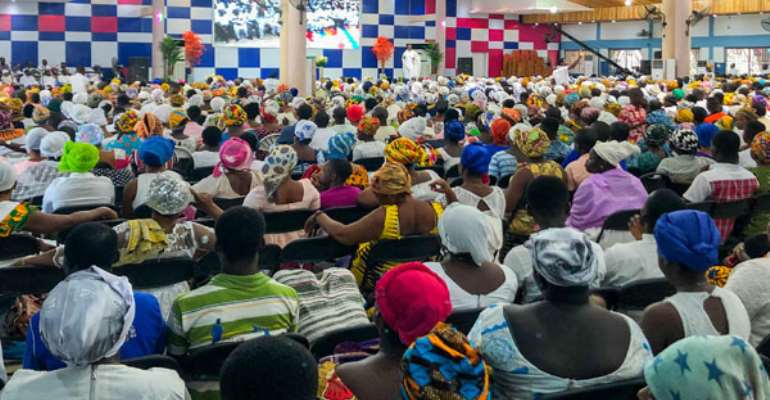 A Lecturer at the Kwame Nkrumah University of Science and Technology (KNUST) Dr Stephen Takyi has called for strict legislation to regulate the activities of churches to maintain discipline and sanity amongst the Christiandom in Ghana.

Dr Stephen Takyi said the Ministry of Chieftaincy and Religious Affairs should have a database of all the Christian organizations including the Christian Council, Pentecostal Council Catholic Bishop Conference and all the other groups and give legislation to regulate the ‘informal Churches’.

Speaking on Otec FM's Breakfast show dubbed’ Nyansapo’ on Tuesday June 2, 2020, Dr Takyi said, ‘’we need some form of regulation to ensure that the work of God is done in a manner that glorifies him. We need to train people in a professional manner. Even when you a gift you would need mentoring to ensure you discharge your work in a holistic manner.’’

" I don’t want the politicians to regulate them but I want the Ministry of Chieftaincy and Religious Affairs to give Legislative Instruments to empower various Christian organizations such as the Christian Council, Pentecostal Council Catholic Bishop Conference to regulate those ‘informal Churches,’’ Dr Takye who is a Development Planning Lecturer advocated.

"The ministry should invite the groups so we dialogue on the issue and compel them to collate database of all Churches across Ghana. This meeting would afford stakeholders to formulate ideas which would later be presented in parliament by the Chieftaincy and Religious Affairs Ministry for consideration, to enable Christian organizations to control and regulate the actives of so-called One Man Churches,’’ he told the programme's host, Captain Koda.

According to Dr Takyi, despite recognising constitutional provisions that guarantee the right to worship said, the state must step in with the institution of an independent body to regulate activities of errant churches.

Noting that the situation was a sad reflection of the situation in the country in terms of human rights abuses, Dr Stephen Takyi said it was the "sacred duty of the state to protect the vulnerable from being exploited for the benefit of a few people. It is imperative that we consider setting up an independent body devoid of politics and empower them to regulate the activities of the Church adding that the action of such errant Churches and their leaders was bringing the name of Christianity into disrepute."

To him, "the major problem we are faced with is the activities of individuals who are running the ‘one man church’. "No council does regulate activities of such churches. This is terrible since these churches do not have constitutions guiding them. So I think some form of regulation is good.’’

He bemoaned how prophets were destroying families with their doomsday prophecies where the tag mothers and relatives of church members as witches.

He was also worried about the tendency by which people who go to church from Monday to Sundays all in the name of prophecies without any productive life.

Is religious life in Ghana out of control?

New Christian churches outside the main denominations are springing up, raising fears not only of spiritual confusion but also secular concerns about noise and inconvenience.

In 2014 there were more than 10,000 churches in Ghana. This refers not to the number of consecrated buildings, but to the number of faith-based groups claiming allegiance to Christianity. The pulse of the faithful may quicken on hearing of this growth in religious observance, but some residents living in the neighborhood regard it chiefly as a nuisance.

The churches are too many, everywhere, some of them make a lot of noise, you can't even talk. And despite their small congregations, they often use loudspeakers and musical instruments during worship.

Part of the problem is that the new faith-based groups do not always have access to purpose-built churches but use educational facilities such as school classrooms for their religious meetings. Some of these facilities are wrecked during acts of religious observance.

Hundreds of branches scattered across Ghana and they usually hold their services in classrooms. There are difficulties but insists they are manageable. Sometimes in some places, chairs and tables are broken, some classrooms become dirty. On the other hand, there are some places where churches pay for the use of such classrooms and some of them repair the chairs and tables that are broken.

But talk of miracles and instant riches is a huge crowd-puller. Some of the new churches have large congregations, but their pastors are inexperienced. Religious life does not exist in a vacuum.

That is several steps away from a call for regulation. But freedom of worship is guaranteed under Ghana's constitution and faith-based groups can't be forced into joining associations that would be open to regulation. So unless the law is changed, the frustration felt by some Ghanaians at the unbridled religious fervor of some their compatriots may continue.