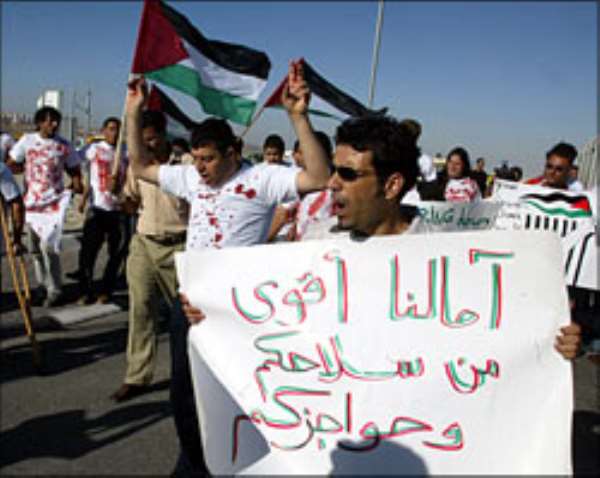 Israel has rejected allegations that it was responsible for the deaths of eight Palestinians on a northern Gaza beach on Friday.

Amir Peretz, the Israeli defence minister, said that Israel had enough evidence to back up its claims that it was not responsible for the incident.

"The accumulating evidence proves that this incident was not due to Israeli forces," he said at a news conference on Tuesday.

"The intention to describe this as an Israeli event is simply not correct."

Meir Klifi, the Israeli general who led the committee, said the army had shelled areas north of the beach but could account for each one.

"There is no chance that a shell hit this area. Absolutely no chance," he said.

Klifi said Palestinian fighters "could have placed something in the area in order to prevent operations by our forces".

Israel has been pounding northern Gaza for weeks with artillery shells in an effort to prevent Palestinian militants from launching rockets into Israeli territory.

Palestinians have angrily rejected the Israeli claims, with Ghazi Hamad, a spokesman for the Hamas-led government, saying that Israel was trying to "escape from shouldering responsibility" for the blast.

"The eyewitnesses and the evidence that we have confirm the massacre is the result of Israeli shelling, and the allegation about land mines planted by Palestinians is baseless," he said.

Marc Garlasco, a military analyst for rights group Human Rights Watch, said it was "patently not the case" that the blast was caused by a mine.

"The injuries of the people in the hospital were all to the torso and head, so a land mine couldn't have done this," he added.

Television footage of the incident was broadcast around the world, leading to widespread controversy. The blast killed seven members of one family picnicking on the beach, and one person who was wounded later died.

Kofi Annan, the United Nations secretary general, has called for a full independent inquiry into the incident.

Also on Tuesday, at least 11 Palestinians, including two children, were killed in two Israeli air strikes in central Gaza city.

My mother is not dead — Farouk Mahama
50 minutes ago