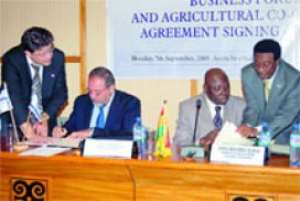 Israel has pledged to assist Ghana with efficient solutions to resolve problems in agriculture, water and education.

The Deputy Prime Minister and Minister of Foreign Affairs of Israel, Mr Avigdor Liberman, who made the pledge on behalf of his country, said Israel was also ready to share knowledge and skills with Ghana, as that country would now focus on bilateral relations as a way of helping solve some of the world’s problems.

“We want to concentrate on bilateral relations to help and try to resolve each other’s problems. We can bring very efficient solutions to resolve problems in agriculture, water and education and we are ready to share our knowledge with you,” Mr Liberman, who ended a one-day visit to the country yesterday, declared.

His visit culminated in the signing of an agreement of co-operation between the two countries, as part of which Israel would help Ghana to develop her aquaculture.

Under the co-operation, Israel would make available its technology and skills available to develop the fishing industry in Ghana through training, research, technical support and financial assistance.

The agreement is within a broader context of a planned co-operation between the two countries in the areas of health and medicine, education and agriculture. The aquaculture support is the second of such a co-operation.

The first started in 2006 and ended last year but its implementation, according to an official at the ministry of agriculture, was not impressive.

The Minister of Foreign Affairs and Regional Integration, Alhaji Mohammed Mumuni, signed on behalf of Ghana with Mr Liberman initialling on behalf of his government.

The Knesset, the Israeli Parliament, has already ratified the agreement for co-operation and Ghana’s Parliament is expected to do so in due course.

The signing came at the end of Mr Liberman’s one-day visit to the country as part of an eight-day five-nation African tour to deepen diplomatic and trade relations between Israel and African countries.

By this agreement, stakeholders in the fishing industry would have the opportunity to develop their capacity, while the private sector would form partnerships and joint ventures to tap into the emerging aquaculture industry in Ghana.

Mr Liberman said the visit and consequent agreements were indication of the two countries’ determination to improve trade and political relations.

He said with overwhelming conflicts and problems across the world, there was the need for countries to use bilateral relationships to help each other, a move Israel would pursue with Ghana.

“We have the know-how in technology and we can assist you in these areas and I hope both sides can continue this fruitful co-operation into the future,” the deputy prime minister of Israel said.

For his part, Mr Mumuni said the Government was determined to pursue a foreign policy that would impact directly on the people and transform their lives for the better.

He said the Government had involved the private sector in such arrangements because it was the sector that would create sustainable jobs capable of taking people off the streets.

“We as a government will create the enabling environment and play the necessary facilitator role for the private sector to operate efficiently,” the foreign affairs minister stated.

He stressed the determination of the Government to modernise agriculture, the mainstay of the economy which has suffered under-investment, and welcomed Israel’s offer to partner the country to develop that and other sectors of the economy.

The Minister of Food and Agriculture, Mr Kwesi Ahwoi, said he would ensure that Parliament ratified the agreement for a two-year co-operation to provide clearer guidelines on the modalities of the co-operation.

“This time round there will be no hiccups. We will make sure that we implement every part of this agreement signed today,” Mr Ahwoi declared.

Mr Liberman was accompanied by a high-level delegation including government officials and business people.

The signing of the agreement was preceded by a business forum between the private sectors of Ghana and Israel.