I was kicked after being shot, says terror raid Muslim 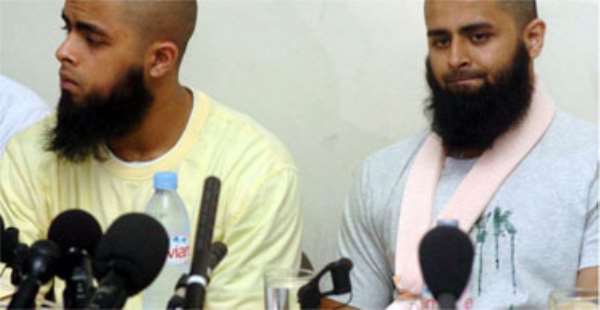 A young Muslim shot by police during a dawn terror raid on a suspected bomb factory in east London broke down today as he described the moment anti-terrorist officers stormed his house.

Mohammed Abdul Kahar, 23, choked back tears as he recalled the 4am raid.

Mr Kahar told a packed press conference how he was woken by the screams of his younger brother.

"From my room I could hear this screaming so I got out of bed," he said.

He said he was clad only in boxer shorts and a t-shirt.

"I assumed a robbery was happening," he said.

He told how he edged down the stairs before suddenly seeing a spark and hearing a big bang.

"At that moment I knew I was shot."

Speaking publicly about the controversial raid for the first time, he said as he lay on the stairs bleeding and fearing for his family he was kicked in the face by a police officer and told to "shut the f*** up."

Mr Kahar told how he put his hand over his chest and saw two officers walking towards him. He then described feeling the shotgun against his chest.

He said: "I was begging 'please, please, I cannot move'."

He claimed that as he pleaded with them, the officers told him to 'shut the f*** up, stay here, stay here'.

"At that moment I thought they were going to shoot me again or shoot my brother," he said.

"I heard them shouting 'secure the room'.

"At that moment I still did not know they were the police, they never said a word about the police."

Mr Kahar claimed he was grabbed and dragged down the stairs and then thrown on the pavement outside.

He added: "I just thought 'they're going to kill us'."

He told reporters he did not realise the raid was a police operation until he was lying on the street.

He also said he did not support terrorism.

Abul Koyair, 20, who like his brother was shaven-headed with a beard, told the press conference the police raid had been "like a dream".

He recalled being woken up by an alarm which appeared to be coming from inside their house.

He said his elder brother emerged from his own bedroom and started going downstairs before suddenly being shot.

He said: "After that it was all quiet. No one said anything. I thought it was like a dream.

He then saw the police officers dragging his brother downstairs, hitting him as they went.

He said: "I kept thinking to myself, 'why didn't they shoot me instead?'."

He was taken outside, handcuffed and told to look at the ground.

Mr Kahar said he was in great pain when he was taken to the hospital, adding: "It seemed like fire. I was burning."

He said he had pleaded with the doctor not to allow him to be taken away to be interviewed, but he had seen police officers asking the doctor to release him early.

He said while he was being interrogated officers repeatedly asked him if he was a member of an extremist group, including at one point the Ku Klux Klan.

His brother told the press conference that before the raid in Forest Gate, east London, he had applied to be a community police officer.

He said he no longer wanted to join the force after the events of June 2.

The brothers' personal testimonies could pile more pressure on Metropolitan Police Commissioner Sir Ian Blair, who has faced fresh calls to resign since the brothers were released without charge on Friday, a week after their arrest.

Asked about Sir Ian's future, the brothers stopped short of calling for him to go today.

Mr Koyair said: "Whoever is responsible should be put to justice, whoever gave the order for this happen."

Mr Kahar said: "I want everyone that was involved in it to apologise."

Mr Kahar said he supported the role of the police, adding: "Without police the country would be lawless."

He said that during his detention in Paddington Green police station he feared officers would frame him.

He said: "I'm a law-abiding citizen. I was born and bred in east London. I love my town."

He went on: "I ain't done nothing to this country. This is my country. I love everyone around."

Experts have suggested that the brothers can expect compensation running into six figures.

The two men were arrested when 250 officers - some armed and some wearing chemical suits - raided their house in Lansdown Road.

Both were held under anti-terror legislation.

Since the raid, Scotland Yard has insisted officers had no choice but to act after receiving intelligence about the existence of a chemical bomb.

Mr Kahar said he "had no idea" who could have given the police intelligence about them.

"From my point of view the person who did this they have terrorised me and my family," he said.

Mr Kahar said his only crime was being Asian and Muslim.

He said he felt no pain from the shot at first but claimed he felt scared as officers allegedly attacked him after he was shot.

"I was begging them, I asked them to spare my life," he said.

Mr Kahar, with his right arm still in a sling, said he was given no warning before being shot in the chest.

"He (the officer) looked at me straightaway and shot and I fell on the floor," he said.

"I did not know myself I was shot until I saw my wound."

He also alleged that no one from the police had had "the decency to phone up and apologise".

Not even the senior officer had said sorry, he said.

Mr Kahar repeated his call for an apology to him and his family but added: "Suing the Met is not even in our heads at the moment."

"This has ruined my life," he continued. "I cannot sleep, I have flashbacks, I cannot sleep with the light off.

"I want everyone that was involved, whoever gave the order for the raid to happen, for the shot to go off, everyone involved to apologise."

When Mr Koyair was asked about reports suggesting he had shot his brother, he responded: "I was really upset. I would never lay a finger on my brother."

Family spokesman Asad Rehman, who also speaks for the Justice4Jean campaign set up after Mr de Menezes was shot by police in London last July, said the bullet fired at Mr Kahar had only missed his heart because of the angle it entered his chest as he came downstairs.

Mr Kahar said he would not be able to return to his house after the ordeal he had suffered.

He said the interrogation had been "like hell", adding: "I knew they made a mistake from the time they entered my house. We are an innocent family."

Asked whether he would be seeking financial compensation from the police, he replied: "I am not interested in money at all. I want everyone to be brought before the courts for the way I was shot."