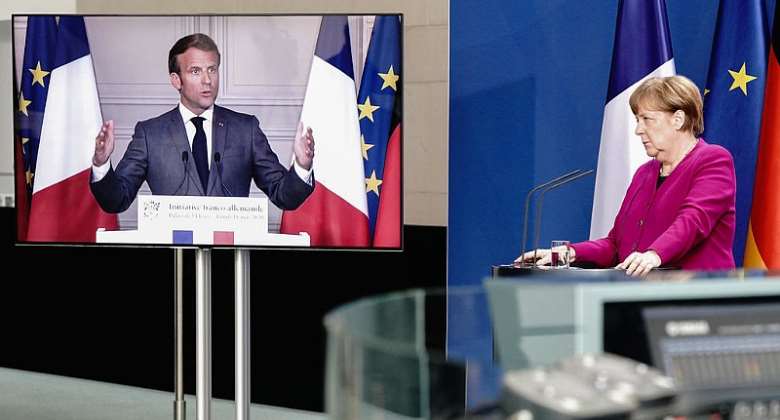 France and Germany have outlined plans for a 500-billion-euro European fund backed by joint EU borrowing to help tackle the economic fallout from Covid- 19.

President Macron and Chancellor Merkel laid out at a videoconference on Monday, a plan for to borrow from the market “in the name of the EU” to fund 500 billion euros of spending on the bloc's worst-hit sectors and regions.

EU countries benefiting would received the money in the form of grants not loans and it would not have to be repaid.

“The aim is to ensure that Europe comes out of the crisis more cohesive and with more solidarity,” said Merkel, calling the proposal “courageous.”

The two leaders hope their idea will receive the backing of the other 25 EU countries.

Hopes for EU-wide agreement
Macron and Merkel hope their plan will receive the approval of the other 25 EU leaders at a full summit, which has yet to be scheduled.

If there is agreement, the fund would break through the bloc's fiscal deadlock. Northern countries have until now firmly rejected joint debt in the name of budget discipline.

But the plan has immediately met resistance from Austrian Chancellor Sebastian Kurz, who insisted that any help “be in the form of loans, not grants”.

The move comes as various EU countries ease lockdown restrictions in a bid to re-start economies, with some countries, particularly Italy and Spain, especially badly hit by the virus.

The two leaders also agreed on ideas to strengthen health co operation within the EU to develop "strategic health sovereignty". They proposed common stocks of  medicines and medical equipment, as well as greater co operation betwwen EU states in the development of vaccines and treatments.