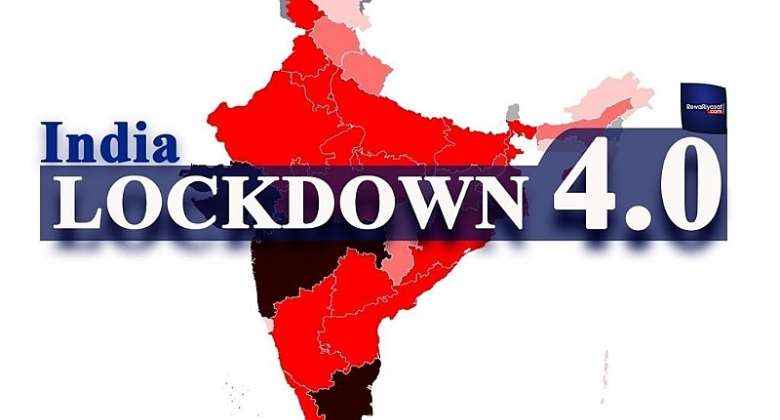 The country's lockdown entered its fourth phase on Monday as various state governments provided more relaxations outside the containment zones.

While announcing lockdown 4, Prime Minister Narendra Modisaid it would come in a "completely different form", with new rules.

"Corona will be with us for a long time but our lives cannot revolve around it. We will wear masks, we will follow the six-foot distance, but we won't let it derail our targets," Modi said.

Lockdown curbs were loosened further in many parts of the country. In many cities, restaurants were allowed to operate takeaway services, while sports complexes and stadiums could host events without spectators, the home affairs ministry said.

The fourth phase of the lockdown in India will start from May 18 and last till May 31.

For the first time since the lockdown was announced, private cars and buses can operate across cities and towns - as well as crossing state borders if they have permission.

The government also gave permission to the functioning of all shops, markets and commercial establishments except those in malls and eased curbs on private offices that were previously allowed to function with one third the staff strength.

However, all domestic and international scheduled airlines operations continue to remain suspended with no specified date announced on when they would resume.

“This sector needs all the support from the government to take off again. In order to ensure that the sector becomes reasonably operational, the primary onus rests with the government,” said aviation expert Parvez Damania.

The confirmed COVID-19 cases in the country had risen to over 96,170 as the death toll from the outbreak was at 3,029. The states of Maharashtra, Gujarat, Tamil Nadu and Delhi reported the highest number of cases.

“The coronavirus is in complete ascendancy stage in these states where it has gone beyond minimal containment. The only way forward is surveillance,” Giridhara Babu of the Public Health Foundation of India told RFI.

Going by the doubling time of the virus in certain states and the spread of the contagion, some epidemiologists feel that India may not yet have seen the worst of the epidemic. Government experts fear the outbreak won't peak in the country until June or July.

Colour-coded India
The entire country has been divided into these three colour-coded zones of red, orange and green and officials maintained that the zones are being continuously monitored for a rise or fall in cases.

While extending the nationwide lockdown, the government took steps to revive the economy and providing succor to small business enterprises.

The package was intended to help credit guarantee schemes for working capital loans of micro, small and medium enterprises, incentives for companies and businesses to maintain a stable workforce, especially as the migrant workers' crisis deepens and expansion of direct benefit transfer schemes.