By Wambui Wamunyu - The Conversation
Article 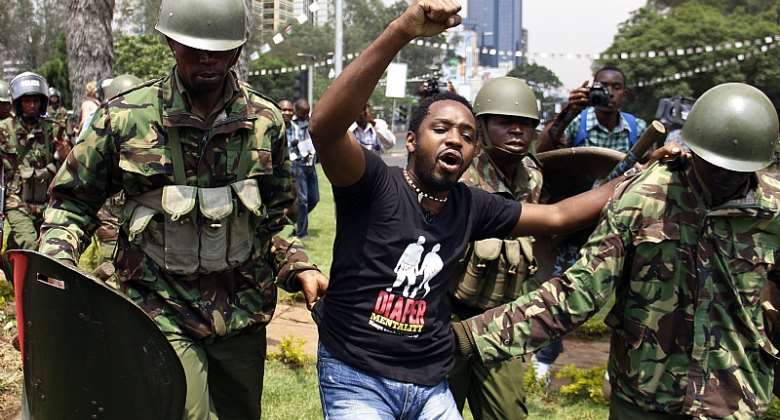 Kenyan activist Boniface Mwangi is arrested during a protest in Nairobi in 2014. - Source: AFP via Getty Images

In the last two months, a wide range of COVID-19 news stories have provided multiple perspectives on the scale and impact of the pandemic in the Kenyan context.

Different media houses have provided infographics contextualising the number of tested cases, exposed the government's handling of aspects such as funding and quarantine , and provided various accounts of citizens' experiences in this season.

What has been interesting is the wider range of content from alternative media sources disseminating news content on platforms such as Facebook Live, Instagram TV, Twitter, and own-domain websites. These content creators are questioning official narratives, upsetting journalistic norms, shaping alternative journalism approaches, and moving beyond advertising as the primary source of journalism revenue.

Scholars such as sociologist and media researcher Valerie Belair-Gagnon and journalism professor Edson C. Tandoc Jr noted the entry of non-traditional actors such as webmasters and computer scientists within digital newsrooms. In a study of a commercial Kenyan news radio station I did three years ago I interrogated these kinds of changes and their impact on journalistic practice.

There are other non-traditional actors outside the traditional newsroom who have also become sources of news content. They include vloggers, bloggers, social media activists and exclusively digital media organisations. On the continent two that stand out are The Elephant and Africa Uncensored .

These “strangers” are engaging in varying types of storytelling . This includes news opinion and analyses, long-form storytelling, extended conversations and portrayals of non-elites as primary sources of information. They tend to rely on alternative income sources such as donor funding and customised production for paying clients.

The production and distribution of news has filtered beyond the traditional newsroom, enabled by digital technologies. Free from legacy media hierarchies and business models, the producers of this content are building audiences and exposing them to a wider range of news perspectives and story approaches.

For more than a century, institutional journalists – those affiliated with print or broadcast news outlets – have typically shared the “news” in Kenya. The commercial press in particular has dominated coverage, with leading newspapers, radio and television stations controlling large sections of market share in their particular segments.

Now the “strangers” are increasingly adding to the coverage. They are taking advantage of the country's fairly robust digital infrastructure to find, produce, share and distribute information that does not rely on government or official accounts as starting points. Rather than follow the traditional “objective” stance to which media houses rhetorically subscribe, these “strangers” are questioning, documenting and commenting on what they cover.

One such “stranger” is Boniface Mwangi, an aspiring politician, photojournalist and activist, whose efforts at promoting free speech and greater democratic freedoms in Kenya have earned him both arrests and accolades .

He is currently documenting life in the COVID-19 era on his Instagram and Facebook accounts. His posts reveals the gap between official government communication and the reality on the streets.

In one Facebook clip, he speaks to residents in a low-income residential area. Government communication has been for Kenyans to stay home, maintain social distance and wash their hands frequently. The people Mwangi speaks to live and work in very close proximity to each other, and purchase water which they receive twice a week. He makes the point that even in issuing the COVID-19 guidelines, the leadership should understand the circumstances of the majority of their citizens, such as the urban poor. Sauti ya Mtaa.

There are several observations that can be made from this emergence of new actors in journalism.

The first is that a greater diversity of voices – particularly the non-elite – is being enabled. Frequently, the (urban) poor are recipients of messages or actions, not direct or primary actors in news media narratives.

Yet in the Sauti ya Mtaa example, they are the primary characters. They appeal to Mwangi for assistance, reveal their daily struggles, and expose the challenges that hamper them from meeting government directives.

Secondly, Instagram TV, Facebook Live and other digital spaces have no boundaries. This enables new storytelling formats. In the case of Sauti ya Mtaa, the narrator carries his camera speaking to people as he finds them. He also provides extensive footage of their situation.

Thirdly, the parameters that bind traditional journalism are pushed to their limits. Mwangi and other journalism “strangers” are choosing to document the struggles of ordinary people, advocate for justice, and empower citizens. This approach is distinct from the traditional tenets of journalism. In this part of the world this is borrowed from the British Broadcasting Corporation's mission to inform, educate, and entertain .

The “strangers” are unrestrained by the institutional limitations of traditional journalism. They are more proactive in pushing for social change and in engaging community.

But Mwangi's brand of journalism has also raised a series of questions. These include what his motivations are, who funds his provocative work, and indeed whether he denies his subjects their dignity and privacy even as he exposes their struggles.

The approach of these storytellers does not negate the work of legacy media journalists. However, the legacy journalists are working with particular challenges. They have had to take on additional work with the entry of digital technologies in news practice, such as producing content for multiple platforms .

Additionally, legacy media houses have suffered heavily in recent times due to a decline in advertising revenue and audience migration to digital platforms. This has limited the range of stories they can tell.

However, as we're seeing in Kenya, the entry of journalistic “strangers” is increasing the possibility of hearing a greater range of candid, critical, citizen-centric stories. These can either be provocative or unsettling in their violation of standard journalistic ethics and norms. But they speak to the disruptions in journalism thriving in the digital space and are likely to last well beyond COVID-19.

Wambui Wamunyu is affiliated with the Kenya Editors Guild.