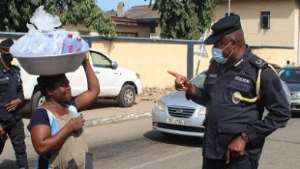 A task force has been set up by the La Dade-Kotopon Municipal Assembly (LaDMA) in the Greater Accra Region to enforce the strict compliance of nose mask-wearing in the municipality.

This comes after the Assembly distributed some 20,000 nose masks to residents within La and its environs on Thursday, May 07, 2020.

According to the assembly, the joint security task force, which is made up of the police and City Guards, will be deployed to the commercial business areas of the municipality to ensure that residents are adhering to the directive of mask-wearing and social distancing protocols.

In an interview with Citi News, the Municipal Chief Executive of LaDMA, Solomon Kotey Nikoi, says the wearing of nose mask must be firmly adhered to.

“People are not taking the wearing of the nose mask serious, it seems they don't understand what is going on. We have a task force made up of city guards and police personnel who will be moving around today and tomorrow.”

“We will continue with the sharing of the nose masks tomorrow but the task force will be doing the monitoring. They will be moving around the central business district and from house to house to create awareness and enforce the wearing of the masks.”

The La Dade-Kotopon Municipal Assembly launched a campaign to mitigate the spread of the COVID-19 pandemic.

The campaign dubbed “Operation Wear Your Nose Mask” is to ensure residents in the municipality adhere to the mandatory wearing of nose masks as directed by the President in his last COVID-19 update.

Mr. Nikoi speaking at the launch in Accra yesterday said, the assembly would provide twenty thousand pieces of masks for distribution to help promote safety among the residents.

He said, to ensure strict compliance, they have directed all institutions and organizations in the municipality to observe the compulsory wearing of masks by both staff and clients, adding that, “the assembly is designing NO MASK, NO ENTRY posters to be dotted across the municipality for all to take note.”

He also appealed to the Traditional Council, the La Market Women Association, Ghana Private Road Transport Union (GPRTU) to support the assembly in its fight against this deadly pandemic by ensuring that, all their members adhere to the mandatory nose mask-wearing and also enforce social distancing at all times in their dealing.