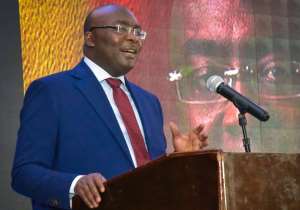 Aristotle described three major rhetorical means of persuasion; ethos, pathos and logos. Ethos uses trust to persuade the audience. So, a politician uses his or her respective reputation and what is perceived or said about them. There is a close connection between reputation and reality. Credibility depends both on expertise and how this is portrayed. Pathos relies on emotions of the audience. An efficient way to move the audience is to appeal to their values. This was what Dr. Bawumia did in opposition. Logos in Greek for logic, and is used to persuade the audience by demonstrating the truth and is based on scientific facts. It is used to appeal to the intellect of the audience, and considered an argument of logic. Ghanaians in the past, were persuaded by Bawumia because they assumed that he was an expert on the topics he presented based on his fake confidence and the amount of emotion he attached to his lies peddling. The media projected him and was seen as an expert in economics. He capitalised on this wrong perception and fake reputation to persuade his audience. Rhetoric is the craft that makes facts and expertise irrelevant to people's decision. The art that masters all others. Plato wrote extensively on this. A rhetorician can simply deploy some subset of his tactics to trounce any real expert. A sufficiently skilled speaker has the shape shifting power to appear persuasive in any domain. That is what our President and his Vice are exhibiting but thank God Ghanaians now awake. If rhetoric is what allows non experts to dominate experts, and if non experts make worse decisions than experts as we've seen the last three years, any healthy society like ours must immediately cultivate the ability to detect and resist rhetorically seductive frauds.

I am surprised some of our intellectuals still fall for Bawumua's tricks. Plato dramatized this dynamic with his doctor and a pastry maker story. Rhetoric concocts pastries for the mind. Minds inflamed by the pleasures of rhetoric will not be swayed by data, facts, or arguments. Millions of Ghanaians successfully avoid the seductions of junk food and sugar every day. Most of them do this not because of some deep knowledge of nutrition, but because they have developed good habits. What this means is that the sweets would not taste good to them, but that they have learned to take pleasure in healthier alternatives. That's how we expect our experts and intellectuals to behave when dealing with mischievous politicians. Bawumia only engages in negative campaign, attacking rivals and spewing lies to turn the public's attention from his administration's failure and abysmal performance.

The Vice President's comparison really didn't make any sense. I consider his remarks as highly unfortunate and irresponsible. Such rhetoric for short-term political and electoral gains, with complete disregard to its effect on the covid-19 fight is regrettable and against norms of responsible. One of our strategic strengths has been our credible stance about being a responsible state, which is why we are not treated at par with other sister nations. Such irresponsible statement by the Vice President at this crucial period will damage our credibility globally and weaken our long standing strategic advantage.

We must be deeply grateful to the health sector and the rest of the sectors, the Armed forces, the police, transporters etc and all those who contributed to maintaining health safety levels. Government must focus on providing adequate PPEs and other protective equipments to our front line workers and provide them with other incentives to raise their morale. These hardworking personnel should always see a united country behind them to give them short to long-term assurance.

What does he want us to compare and what was he thanking God for? For inflicting the two crisis on us? Because it gives him the opportunity to engage himself in that needless propaganda? He doesn't care about the families who have lost their dear ones, those still suffocating in our hospitals, the health workers who are defying all odds to save lives? His major concern is the political gains he will make out of this terrible situation?.

Did Mahama receive immediate IMF emergency relief support during the dumsor crisis? Did he establish a special trust fund to receive donations from individuals, private organizations and state institutions? And what about public support and patience? Ghanaians including the government's main political opponents cooperated and still doing same and supporting government in the covid-19 fight because of the disease's severity and the destruction it is causing. It is about life and death hence the nationwide support the fight continue to receive. The situation during the dumsor fight was the opposite of what we witnessing today. Ghanaians became very impatient because of previous crisis and the opposition then capitalised on the situation to chastise the incumbent and incited Ghanaians against the administration. Are these the issues Dr Bawumia is calling on Ghanaians to compare and interrogate?

The coronavirus pandemic has placed extraordinary demands on leaders in business and beyond. The humanitarian toll taken by the disease creates fear among employees and other stakeholders. The massive scale of the outbreak and its sheer unpredictability makes it challenging for our government and our health personnel to respond effectively. Recognising that our nation is facing serious crisis is the first thing the President and his Vice must do. Recognising the dangers the disease possess and going to do to our socioeconomic settings will help you mount the right response. This is not the time for baseless comparison, cheap politics and spewing of lies for political advantage. What our leaders need now is not redefined response and propaganda theories but behavior and mindsets that will prevent them from overreacting to yesterday's developments and help them look ahead.

Reaction from Ghanaians to Dr. Bawumia's statement confirms one sacred fact: his image and reputation have dropped significantly, Ghanaians have lost confidence and trust in him and his administration.