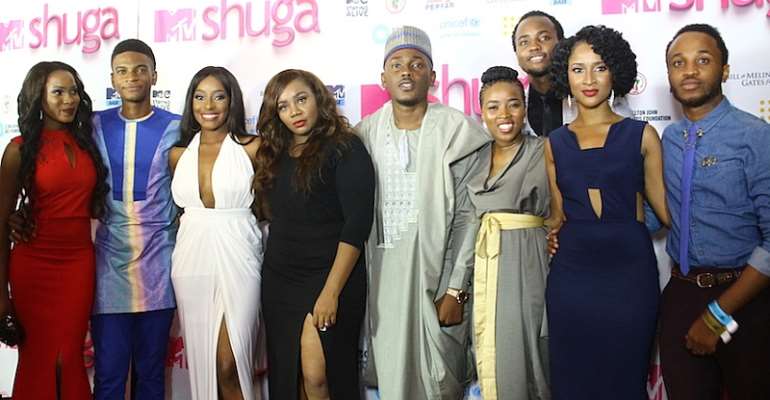 Star actress Dakore Egbuson Akande, OAP Olisa Adibua and Lynxxx were some of the celebrities that gathered to witness the world premiere of season of 4 of the award winning series, MTV Shuga powered by MTV Base Africa and MTV Staying Alive Foundation.

The event which held at Silverbird Galleria, Lagos had the celebrities and had guests from the media, music and movie industry treated to a red carpet reception followed by a cocktail session and a an exclusive premiere of the series, all ably anchored by one of the cast, Timini Egbuson.

Speaking at the premiere, Georgia Arnold, Executive Director, MTV Staying Alive Foundation thanked all present and reiterated the foundation’s commitment towards building a society that is well informed about HIV/AIDS.

She said, “The responses we have received from the previous three seasons have been encouraging and that explains our excitement bringing the season 4 your way. One other interesting about this season is the fact that four of the cast members are still in the University, which is good thing considering the fact that young adolescents are part of the Shuga target audience’.

MTV Shuga Is an advocacy TV series for responsible sexual behaviour, was first aired in November, 2009 on MTV Base. It has since grown to become one of the most followed TV series winning several awards including the 2015 Africa Magic Viewers Choice Awards. The fourth season features a crop of amazing talents including Adesua Etomi, Ghana’s Peace Hyde and will begin airing on September 11 on TV stations across Nigeria.

The event also had in attendance, some of the cast members including Emmanuel Ikubese, Sharon Ezeamaka, Timini Egbuson, Adesua Etomi, Jemima Osunde, Dorcas Shola Fapson, Producer Chris Ihidero among many others.