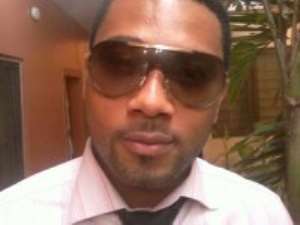 Tuvi James is a versatile actor and producer. In this encounter with Funmi Elugbaju, he speaks on his mission and vision for the Nigerian movie... industry.

Who is Tuvi James?

He his a very deep and kind hearted person, he loves life and he is very easy going. He has integrity. He is very bold. He believes and loves people just like himself. He loves to give life to other people. There is a touch of life in me and that is what I have going for me. I have that touch of realness and integrity. All these are what make Tuvi James and I love God most especially and I think He is my secret.

Can you let us into your family background?

My mum and dad are alive. They are both retired lawyers. I am the first male child, I have an elder sister. I have two younger ones in the university right now. My family is a very interesting one.

What are you up to now?

Everything is alright. You just don't sit down idle, you must keep digging until you get what you want. I have been involved in a project with a partner from Dallas. His name is Gugu E. Michael. He is a director and a producer. We co-produced the movie called the Pastor's Wife. We are almost through on location. We have been on set for the past 19 to 20 days. I played the lead role in the film with a couple of up-coming artistes.

What is the movie about?

It is about a pastor's wife and the secretary to the super start, Handson Hugo, in the movie, that is in the script. The pastor's wife has this lust for a super star she used to watch on television. Apart from that, she secretly dates men in the church while the pastor is praying that God should reveal to him what is wrong in the church. God now makes the super star the pastor's wife is obsessed with to come for counselling and the rest of the story should be watched out for. It is a very beautiful story. Sometimes the people that you are close to are those that will stab you in the back.

Did you train professionally as an actor?

I was trained by the British Council. I attended the council's course and I was issued a certificate. Apart from that, I also did a lot of training from broadcasting which gave me my freedom of speech in terms of voicing and I did my IT with the Voice of Nigeria (VON).

That is part of the packaging that gives you an edge out there, which makes you more confident and bold. I also conduct a lot of research on international films, films in box office and films that have won awards. I am also hooked up with another partner called Nick Mono and we are trying to do the Nigerian version of a film called the 7 Samurai, which was done some years back. Mono, a British-trained actor and a producer who also works in Germany and Canada came with his wife. They wanted to start a film school but they realised it was going to cost them a lot more so they decided to drop the idea. The wife is a costume designer so we are partnering to do a project that will enter the box office and the film will enter the film festival and the theatre abroad. That is what I am working on now, apart from what I am doing at the moment.

We are setting up a workshop called the Film Language where we will elaborate on exposing people and letting them know what it means to make a film, both the cast and crew. So, we have a internationally recognised cameraman called Frank Macaulay. He is here in Nigeria. We also have a couple of international directors and producers who work internationally who will also come to speak and educate the people so that they can be part of it. It is for screen actors and crew members too.

What did you study in school?

I studied Computer Science but acting is what I do basically now. Aside from acting, I also do one or two things with my colleagues in school. But right now, I am more into producing and directing and I am also becoming a strong practitioner in the movie industry as I intend to start doing projects that will blow away people's mind. We are planing to start working on series and so many other things because the film industry has come of age. We need to be recognised globally. Our filming, acting and production should begin to speak volume and not just in terms of quantity but quality. I am also into Yoruba films as well. One is called Eru and Eremida and a lot of others.

What do you do outside movies?

How would you describe your experience in the movie industry?

Very interesting because it expands my horizon to life and what Nigeria ought to be. In that I see myself as an ambassador that has been given so much and I have to give to the society with love what has been given to me. I believe so much in love and we have to believe in ourselves because we can perform more exploits with that. A tree cannot make a forest. When we learn to come together in Nigeria and address what we need to address under one umbrella, we will begin to do exploits. But until then, we will keep doing it individually.

What kind of food will make your day?

You won't believe this but its amala and ogufe. I love it. Recently I was asking my friend where can I go and eat amala on a Sunday. Especially with gbegiri and ewedu, it is superb.

What is unique about your acting that makes you different from others?

I am very natural and real. Apart from the job I do, which is my TV Life, I try as much as possible to keep it real and be like every other person because we practically do the same things, like going to the toilet and the likes. I try not to allow the TV thing get into my head and I don't live a fake life and that is what makes me happy. I also give room for my fans to reach out to me when they want.

How would you describe Nigeria's movie industry?

The movie industry is growing fast and it has brought us a lot of integrity, and exposed us internationally. However, we need to start doing it professionally. So that we can have workshops and film villages, where we can train more people like what Amstel Box Office and Wale Adenuga are doing right now. They are doing a wonderful thing with this and we need more hands in that area because the industry is quite big. We need people who are more passionate in the industry to be able to bring in more trainings and create where the artistes will begin to get royalties and make them live up to standard as actors. We also need to bring in entertainment lawyers that will be able to fight for actors and producers.

These things need to take place in the industry for it to meet up with world standard. Sometimes people see you on the road and because they have seen you on television they think you have millions of naira in your account. But when they see you trying to take okada or catch a bus they get disappointed.

It is not all the actors that earn a whole lot of money. A lot of people have paid their dues and have the face but haven't started earning the money. It has not reached the standard where the money and the benefits are coming in. This is the stage I am hoping the industry will get to. You will not see Bradd Pitt in every movie and every poster. You only see him in one movie in a year or two and the same thing goes for Tom Cruise and Richard Gere. One movie alone can keep them going for five years. So, we need to begin to see ourselves in that area so that this industry will begin to take a proper shape. So far, we are doing well and with God's grace we will get there.

What have you been doing on your own part to ensure that the industry grows?

If we do a film properly here an international producer or agent can see us as a face they can market because our films should get into the real market and that is what we are doing. Right now, we are setting up a workshop which we call the 7 Samurai. We are trying to do the story of the origin of Oba of Benin. We are doing stories on the police, how they should be seen in Nigeria and many other stories. But the first is the 7 Samurai and the workshop.

In the league of top Nigerian actors, how will you rate yourself?

The relationship is good, I respect myself. My colleagues are very interesting people to work with. It is amazing when you come across a colleague on set and you have not seen each other for a long time and you are like: 'Wow, Tuvi it is good to have you on my set'. A lot of actors are difficult to work with but you have to keep your mind free and be professional about what you do.

How do you relax?

I hang out sometimes. I sing, so I go to karaoke with my friend or my girlfriend.

Are you planning to go into music?

That is in the pipeline. It is part of the project I am working on.