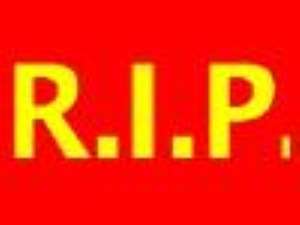 Top Nigerian fuji act based in Houston, Texas, the United States, Alhaji Rasheed Adio, a.k.a. “Mr. Somebody”, is dead.

http://nollywoodgists.com learnt that Adio, who was formerly known as “Second Barrister,” died last Sunday, at about 12.00 noon. The musician reportedly died from injuries he sustained when a car veered off the road and hit him while he was standing beside his own car in Houston. Abiodun Onafuye, his vocalist who is also based in the US, broke the sad news to his family yesterday. As at the time of going to press, http://nollywoodgists.com gathered that members of his family were deliberating on whether to bury the deceased in the US or Nigeria.

Rasheed Adio, who would have turned 50 on 27 August, this year, left Nigeria in April, 1988, after he released an album titled Peace on the Sigma Disc label, owned by King Sunny Ade. The artsite lived in the U.S. for about 11 years, and was reportedly planning to return home when the tragic incident occurred.