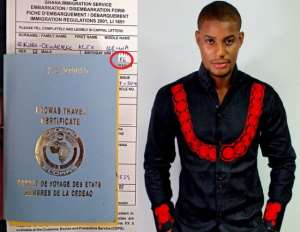 Controversial Nigerian celebrity, Alex Ekubo may have shocked his numerous fans over the revelation of his age on his Twitter page on Tuesday. Alex revealed that he was born in 1986.

Since he made the exposure yesterday, many have expressed surprise and the model turned actor has reacted to that. He was accused of lying about it age.

In his reaction, Alex said, "what oh! Abeg make una no vex, all of you surprise that I'm 28, did you all think I was an old corn?"

He further posted a photo of his ECOWAS travel certificate, which revealed that he was born in 1986, which makes him 28. Alex also stated that he had to disclose his real age, to reply rumour mongers who said he is above the age he claims to be.

The Power Of Marriage, PSquare On The Verge of Breaking Up???

The day I had to slap my dad - Actor Femi Adebayo'

Many Celebrities in Nollywood Are Still Living in Bondage

Latest Photo Reports
Catch up with all the political quotes from our politicians.
Advertise here
More Nollywood on fire
ModernGhana Links
Checkout Eniola Badmus Jump Suit to Davido’s Concert
Until you learn to love others, love will always depart from you-Actress, Georgina Onuoha Curses
Death Averted: Actress, Sonia Ogiri Survives Ghastly Motor Accident
After Long Battle with Acute Diabetes Actor, Obi Madubogwu is Dead
I’m Proud That I don’t Borrow Clothes to Wear…Actress, Ayoola Kikelomo
People Think My Hubby Has a Side Chic…………Toke Makinwa
Am Scandal Free Because Of My Love For God ……Actor, Elvis Chuks
I Wish for a Plastic Surgery Soon……….Afrocandy
I Can Now Do Whatever Pleases Me—Niyola Boasts
TOP STORIES