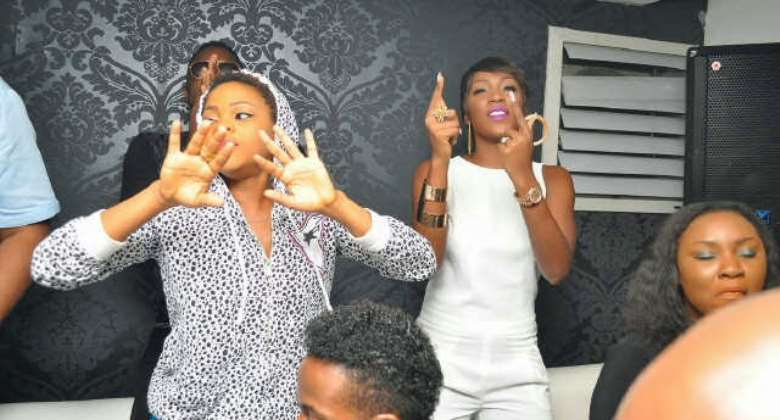 Lagos, Benin and Enugun witnessed real fun last weekend when the #MTNCelebdouble finally produced the company's ambassadors' look-alikes. It was hard to differentiate between most of the musical superstars and their close splitting images.

This resulted in momentary suspense, mixed with fun, as the hundreds of musical fans who thronged to the separate clubs, to be part of the Invasion, struggled to spot out the real image. The fans were thrilled to meet their idolised celebrities and the 'doubles'.

In Lagos, precisely, at the 'The Place', the confusion of those present was exciting. While the music blasted away, Don Jazzy, Iyanya, Tiwa Savage and Chidinma walked in. The crowd was soon amazed as the striking resemblances of Davido, Wizkid, Praiz and D'Prince stepped in behind them. There were minutes of debates if they were the real ambassadors or the look-alikes they have come to party with .

Wizkid's double, Mbaefo Stanley, who resides in Port Harcourt, could not hold his joy at the sight of the celebrities and pomp around him. He expressed cheerfully, 'this is one of my best nights'.

Also, David Fortune, D'Prince's double and Odeka Arthur who looked perfectly like the Nigerian R & B singer and Headies Award winner, Praiz, said they would treasure the night for a long time.

Meanwhile, Iyanya, who wore a new look, enthusiastically appreciated the large turn-out, saying it gave him satisfaction to party with Nigerian musical fans and find someone who looked like him. Don Jazzy and Tiwa Savage also expressed the same feeling while leaving the club located on Adeola Odeku, at the early hour of the morning.

In Benin, the celebdoubles bore an unbelievable resemblance to the actual celebs themselves. Prior to the actual party, they had been lodged in a luxurious hotel, taken on a shopping spree, given a high-class spa treatment, and spoilt silly.

One of the Celebdoubles was Adeoye Foyinsade who bears a striking resemblance to Tiwa Savage. She gushed over the entire privileges accorded her by MTN. "I really didn't expect that it'd be this cool! Not only do I look like Tiwa Savage, from the way I have been treated all day, I think I might be her! Hanging out with everyone here caps it up nicely".

Similar experience was recorded in Enugu. Harrysong and Praiz were at the Toscana Hotel, the venue which hosted a massive crowd of fans who relived their fantasies of becoming those they idolized.

The two MTN ambassadors Praiz and Harrysong, performed some of their hit songs that made them so endearing. To crown it Praiz joked: “When I saw someone looking so much like me, I actually thought he was me, because the resemblance was on point”.

Nothing Else Matters 'To Me Now'--Jim Iyke Talks On Deliverance From Evil Spirit.

Camilla Mberekpe Denies Confessing To Witchcraft…Explains How She Was Delivered By T.B Joshua

Camilla Mberekpe's confession: Is it African magic or Holy spirit in action? [Video]