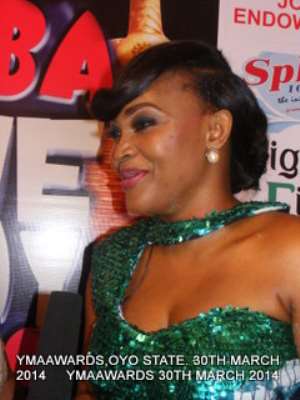 Recently, at the Yoruba Movies Academy Awards (YMAA) held at the Ibadan Civic Centre, Oyo State, the Yoruba actress and mother of two, stepped out in a scintillating stylish turquoise sequin and ankara one shoulder-halter neck dress, with her makeup brilliantly done.

However, Mercy who won the award for the Best Indigenous Language Movie/Series(Yoruba) at the AMVCA 2014, did not grab any award at the YMAA.

Other stars such as Odunlade Adekola, Jibola Dabo graced the event.