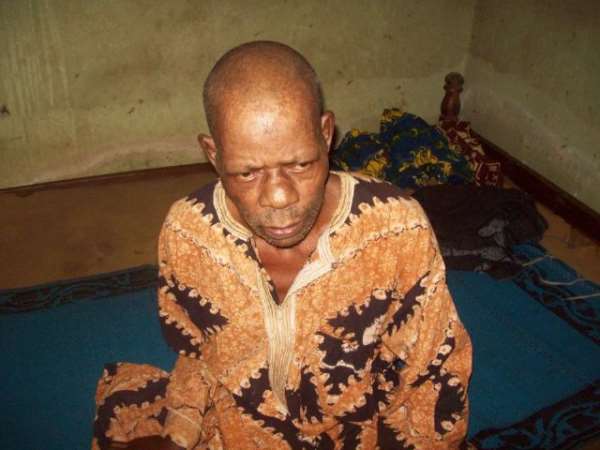 This is Dento this morning and it is sad that he is dying and all he just need to live according to those taking care of him is 250,000 and it seem Dento might die as his hope of raising the 250,000 thousand is getting dimmer by the day.

MetroNews published his pathetic story in April and till date,he is yet to get better.

According to a neighbour, who pleaded for anonymity, “One Sunday night, we bade one another good night as everybody went to sleep after chatting at the balcony of his (Dento) house as we usually do every night.

“But when his 13-year old son, Moshood, went to his bedroom to greet him the next morning, the versatile actor was unable to move his body,” the neighbour said.

Artistes have been visiting his Omotola Street, Owode area of Ibadan, Oyo state residence. It was gathered that his family has resorted to traditional healing.

The ailing actor has been off the acting scene for the past five years. He uses his late father's building, where he lives, for his tailoring work.

He was a trained tailor before he ventured into full time acting.

According to a source, the second wife, who parked to her house a few years ago, had been visiting him regularly for care.

Dento, born about 60 years ago, is a native of Agbongbon area in Ibadan, Oyo State.

He became popular when he joined Chief Lere Paimo Theatre Group in the late 1970s. He also featured in an NTA Ibadan drama series in the early 1980s produced by the theatre group, and since then, he has become a household name. I Am S*x Starved--Controversial Actress, Cossy Orjiakor Cries Out

PHOTO: Mama G's Son, Nduka With Bride To Be, Mary

Pictures From Genevieve's Birthday At 33