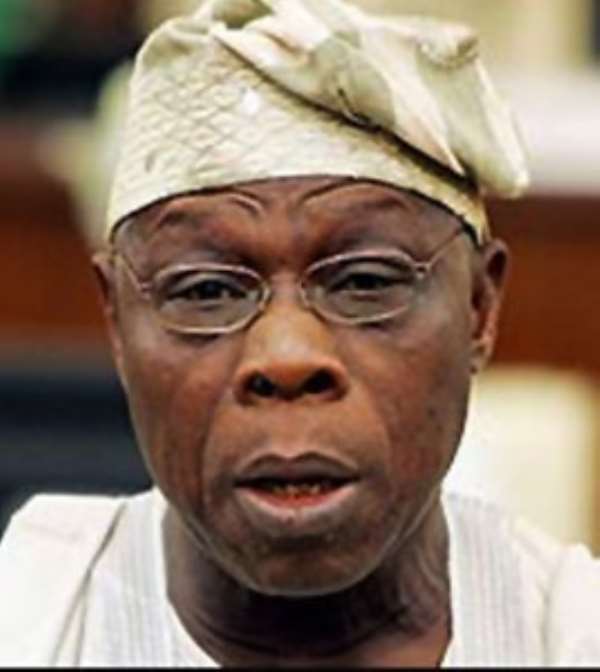 More facts have emerged on why former President Olusegun Obasanjo visited Maiduguri, Thursday afternoon. Also, insight into what transpired at the meeting Obasanjo had with families of the Boko Haram members murdered in July, 2009 has emerged.

Competent sources in the meeting told us that spokesperson of families Obasanjo met, Babakura Alhaji Fugu, gave the former president conditions on which the group would stop hostilities, as first step towards achieving the much-desired lasting peace.

An insider revealed that Babakura, son of the murdered 76-year-old Alhaji Baba Fugu Mohammed, said the court judgment of Tuesday, April 13, 2010 be complied with fully, as the starting point.

According to Babakura, it was gathered, Hon Justice Mohammed Mustapher of the Borno State High Court 3, Maiduguri, had given the judgment in favour of the family, when it dragged the federal and state governments before it. Obasanjo was said to have demanded the copy of the judgment, and estimate of the compensation expected from the government.

The family was said to have given him estimate of the property destroyed by agents of government, who moved in with a bulldozer and levelled the family compound after killing the breadwinner.

In the court judgment, which copy we got, the judge had declared, among others that:

• Extra judicial murder of the applicant's father, Alhaji Baba Fugu Mohammed, by the respondents is illegal, unconstitutional and a violation of his right to life as enshrined in the constitution of the Federal Republic of Nigeria, the African charter and the universal declaration of human rights.

• The detention of and subsequent execution of Alhaji Baba Fugu Mohammed on July 31, 2009 by the respondents was unconstitutional and a violation of his right to fair hearing, as enshrined in the constitution of the Federal Republic of Nigeria, the African charter and the universal declaration of human rights.

• The respondents are hereby ordered to exhume the corpse of the deceased, Baba Fugu Mohammed, wherever it is and release same to his family for a decent burial.

• The respondents are hereby ordered to jointly and severally apologise to the applicant for their reprehensive and unconstitutional acts.

• The respondents and their agents wherever they may be are hereby restrained from harassing or intimidating the applicant.

• The president, Federal Republic of Nigeria, the Attorney General of the Federation, the Inspector General of Police, the executive governor of Borno State and the Attorney General and commissioner of justice, Borno State, the 1st to 5th respondents in this case, are hereby ordered jointly and severally to pay to the applicant the sum of One Hundred Million Naira (N100, 000, 000.00) in compensation to the applicant.

Government counsel, Yusuf Ali, a senior advocate of Nigeria (SAN) had filed an appeal against the judgment. The next hearing date is fixed for Monday, September 19, 2011.

On citing the document, Obasanjo was said to have expressed utter shock, saying that he never knew that they ever went to court and got favourable judgment, revealed our sources.

We gathered that aside this, the family also handed Obasanjo a picture of the mutilated body of their father, after the brutal murder.

The former president was said to have told the meeting that he merely came to condole with the families over the killing of their breadwinner and find lasting solution to the lingering crises and blood letting.

He was said to have promised to pass, to the Federal Government the facts he gathered from the meeting and requested for three weeks within which he will get back to them. He told the family that now that he stepped into the matter, a lasting solution has come.

Our investigations also revealed that series of letters had been written to the Federal Government through office of the Attorney General and Minister of Justice by the family lawyers, Anayo Adibe & Partners, in Maiduguri, requesting to settle the matter out of court. None of the letters were acknowledged.

The peace meeting, held in Maiduguri under closed door, was said to have been brokered by a Kaduna-based foremost human rights activist