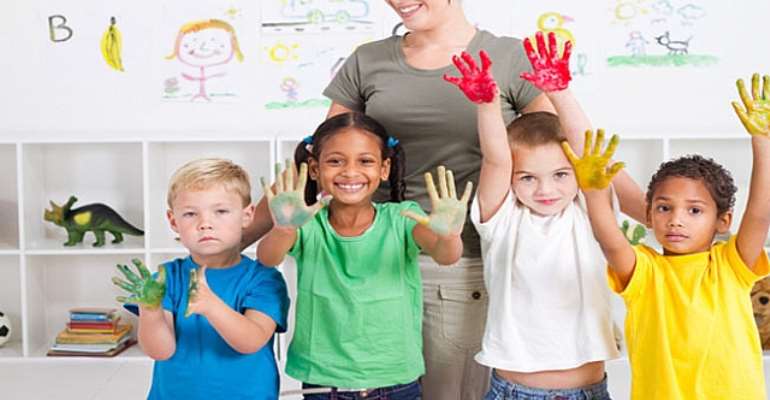 by Erin Zammett Ruddy
Photo: Erin Zammett Ruddy .Five Signs My Middle Child Is Turning Into a 'Middle Child'- My 4-year-old drew on my 7-month-old yesterday. It was the latest in a series of crimes that all point to her becoming a classic middle child. Which I am, so I get it. Oh, the injustice of not being born first or last! My oldest is almost 7, the only boy, and generally a sweet, dynamic kid. The baby is super mellow and everyone fawns all over her as people do when there's a chubby, smiley little thing around. And then there's Nora, who's sassy and spirited and smart and, well, lately a whiny, conniving pain in the you-know-what. Some of her recent infractions:

1. The photo above. Nora had been happily writing in a notebook on our way home from the grocery store but when we pulled into the driveway, I saw her masterpiece. I call it “Nora and the Purple Marker.” Did I mention Nora is 4-and-a-half and not 2?! WTF?! Also: She snuck the marker into the car; she was supposed to be using a crayon.

2. She climbs into the pack and play, the crib, the bouncy chair, the stroller, the high chair, and the baby's pool float; she squeezes into her onesies (that's a sight!); she puts on the baby's shoes, sunglasses, and hats; and samples all her food. It's a good thing I'm not breastfeeding because she'd definitely want to take 'em for a spin and Lord knows I'm not mom enough to handle that.

3. At any given moment, she's ranting about some injustice or another brought upon by her brother, who gets to do everything. He gets the better seat in the car, scores more goals, rides a cooler bike, he can read, he can spell, he's allowed to swim to the ropes. I try to explain to her that it's just because he's older and soon she'll be doing all of that and the baby won't, but she doesn't want to hear it. She just wants to cry hysterically because Alex got to carry the watermelon into the house and she didn't.

4. She doesn't listen to a #!*$ thing I say and blank stares at me when I try to discipline her, completely unfazed by my attempts to regulate. Not sure if this is a middle child thing or a 4-year-old thing or a girl thing, but it's not a fun thing, I'll tell you that.

5. Her knee-jerk reaction to any perceived slight: “Nobody pays attention to me and you never let me do what I want to do and you're so mean to me and why aren't you listening to me, you're ignoring me!” I will admit to occasionally not listening to my children (like when they ask for the same thing over and over again despite the fact that I've already said no), but I promise I am an equal-opportunity ignorer. Oh, and yesterday she actually said, “Mom, you love Alex more than me.” Well, Nora, somedays that's true. Especially lately. I'M KIDDING!

Honestly, it kind of broke my heart**, as much of this stuff does. I've read the studies about middle children turning out awesome and confident and strong and versatile. As a middle child myself, I obviously believe them. I also know Nora will be all of that and more. But I don't want her to feel less than in any way along the way. I joke about it but I promise we give her plenty of love and attention and more than her share of one-on-one time. It's just a transition for all of us and it isn't always easy.

**Oh, and then I realized she's just playing me as usual.

[Hot Video] Shatta Wale vim dies as prisoners hoot at him in...
48 minutes ago