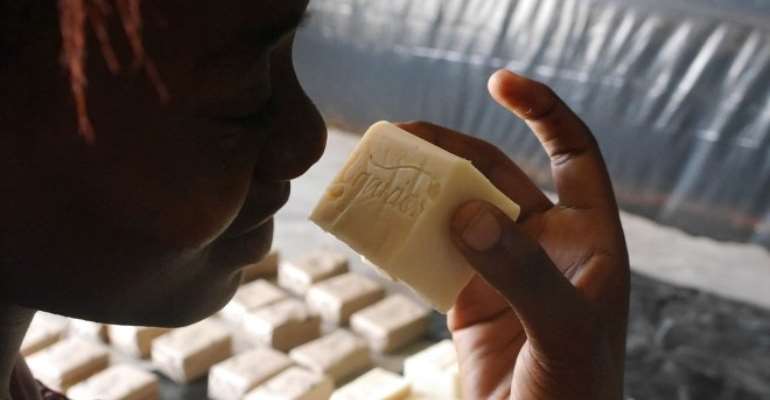 Almost every single day there’s a startup enterprise coming out of Africa. Within the many African businesses, there are some worth highlighting and shedding light on. The following is one that is using soap not only as a hygiene product, but also to prevent malaria for kids below the age of 5 living in Uganda.

Uganics is a social enterprise that produces and sells mosquito repellent soaps. This healthcare product was spearheaded and co-founded by Joan Nalubega of Uganda. As a youth, she regularly experienced incidents of malaria. However, Joan was able to overcome these health-related issues to start a business that combats malaria.

The journey of Uganics has had its ups and downs as well as successes and failures. Established in April 2016, the aim was to find an intervention against malaria. Nalubega worked with different chemistry students at Makerere University in Kampala, Uganda, and at Mannheim University in Germany on the product development. Luckily, in December 2017, Uganics achieved success with its final product. Then, in April 2018, it was certified as organic soap by the government of Uganda .

Besides the repellant component, the soap also has organic essential oils, including olive oil, coconut oil, lavender and citronella , among other natural ingredients.

Nalubega has created two levels of pricing for tourists and locals . Reason being, most repellant products were created for and marketed to tourists at a high cost. Therefore, a system of selling such products to tourists at a premium and using a portion of the revenue to serve as a discount to low income Ugandans made reasonable sense.

Uganics is a for-profit business but will always have a social impact focus. Thus, this helps to explain their two-tier pricing model where the same product is sold at more than 100% profit to the socially and ecologically conscious guests at lodges and hotels, and then at an affordable, subsidized price, to local families in rural communities.

Along with having rural suppliers, Uganics has employees who have been trained in production, and 5 co-founders who assist Nalubega with the overall business operations. The production facility is currently on land owned by the Social Innovation Academy (SINA) of Uganda .

In additions to marketing and selling the soap, Uganics also runs awareness campaigns in the country on how to prevent malaria when sleeping with mosquito nets and throughout the day .

Today, with her business partner and fellow scholar, Kaganda Shafik, Nalubega has a thriving social enterprise. Uganics employs many women in rural areas to harvest herbs to make their soap, which repels mosquitoes for more than six hours . They have partnered with several Ugandan hospitals to raise awareness about malaria too.

Nalubega and Shafik are still based at SINA’s campus , where they run Uganics and mentor other scholars. They plan on moving the business into its own storefront later this year.

In closing, their kind of soap is helping to prevent malaria in their region, especially for mothers with kids below the age of 5 living in rural areas . This is significant because it extends the lifecycle of adults and children for many generations to come. That is, tremendous impact to say the least, especially for Ugandans!