A Ghanaian artist that deserves recognition is the GHANATTA trained DANKYI MENSAH.

Following in the footsteps of other prominent Ghanatta College of Art Alumni with international pedigree such Amoako Boafo, Otis Quarcoe, Cornelius Armah, Kwesi Botchway and Emmanuel Taku, is Dankyi Mensah.

For seasoned art collectors and historians, these Ghanaian artists collectively embody the vanguard of a new generation of African painters coming up with an evolving new art vocabulary.

With his recently sold-out paintings in New York, solo exhibitions in London and Art Brussels, and an upcoming exhibition in Knokke, Belgium with Maruani Mercier Gallery, Dankyi Mensah can claim to have international gravitas. 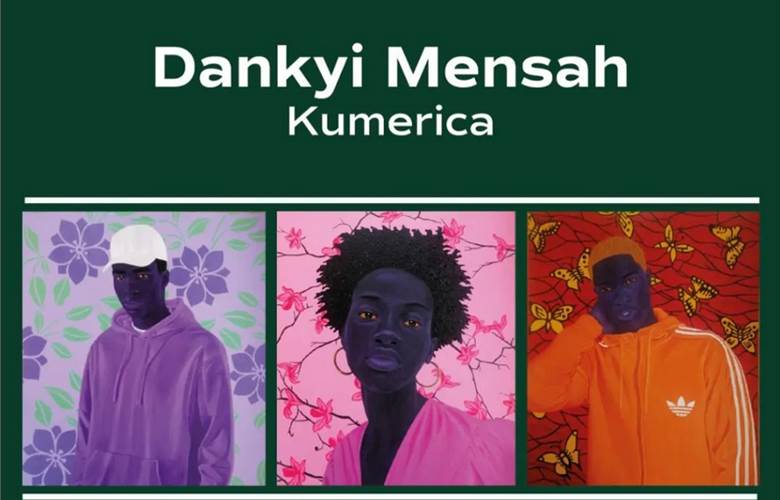 So, how do we understand Dankyi Mensah as a Ghanaian artist gaining international recognition?

Dankyi sees art as a reflection of his history and his society. As he said in a recent interview: “It is a mirror image of what I see and feel around me. We are all social beings, and we interact with each other. My social position in society is what fuels my art. But at a more fundamental level, I hope my art can create a better society for my people."

For his current project, KUMERICA, the painter Dankyi Mensah seeks to document the ongoing development of the contemporary urban, social, and political landscape of Ghana through colourful portraiture.

The 'Kumerican' series explores the concept of cultural hybridization and seek to document the development of the contemporary urban, social, and political landscape in Kumasi, Ghana through colourful, figurative portraiture.

Kumerica––a term often associated with the music scene––revolves around the encounter between the local culture of Kumasi, in the Ashanti region, and American urban hip-hop culture. 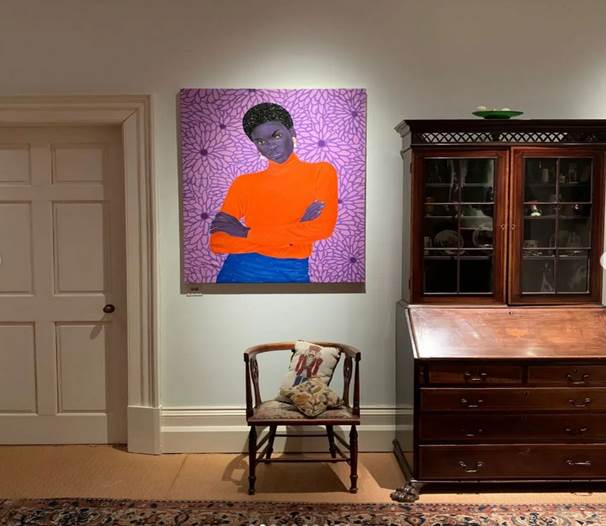 But for Dankyi, this goes beyond music and lifestyles, and includes the crafting of a new identity, such as the changing of street names, and the adoption of a new flag as a sign of the times. The meaning of these identities becomes a focal point in his art. 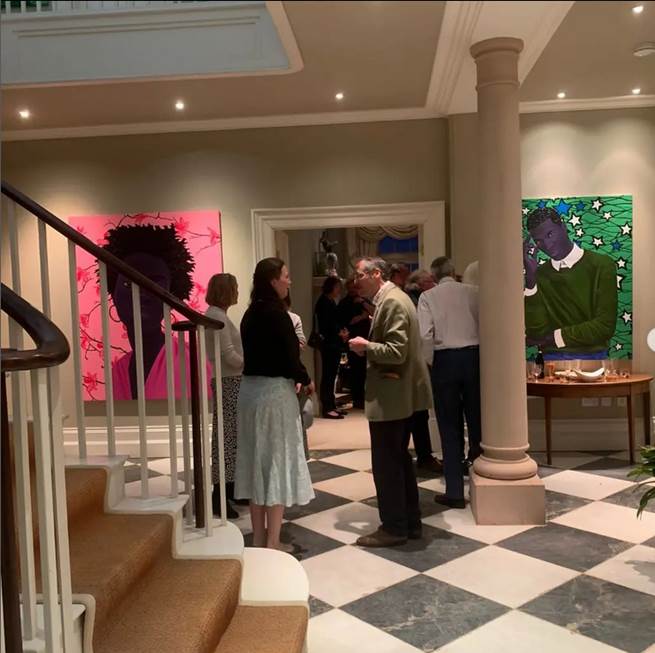 Dankyi attempts to capture this cultural shift by depicting his subjects dressed in an American-influenced street style posed against a background of traditional Ghanaian fabric patterns, ultimately re-examining what the Kumerican phenomena means within the contemporary social urban landscape of Kumasi, Ghana.

The Black bodies in Dankyi’s paintings juxtaposed with these vivid backgrounds are part of the emerging artist discourse about blackness presenting a counter-narrative to white standards of beauty. Here, one sees echoes of the famed African American artist Kehinde Willey in his works.

As Dankyi explains: “My artistic vocabulary pushes me to explore and celebrate Blackness in contrast to how Blacks have been portrayed in history. It appears to me that capturing the black skin in purple and blue hues conveys a sense of multiplicity of what it means to be black. Blackness is not monolithic.” In an interview, he notes that seeing Black portraiture in the major museum collections can be empowering for diasporic Blacks. 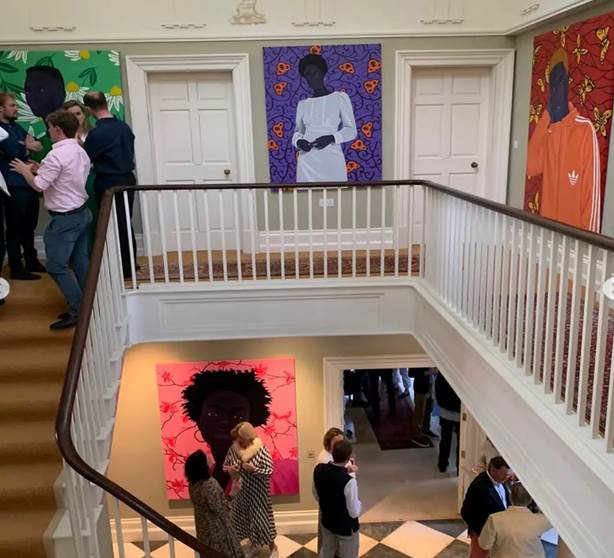 More so, he explains that his use of the colour purple to capture black skins celebrates the regal and royal nature of Blackness!

In his solo booth exhibition at Art Brussels, Dankyi Mensah plays with the substance of his acrylic paints, manipulating it to give variable dimensions such as texture to the hair of his subjects which adds an element of life.

A particular noticeable feature of Dankyi’s work is the portrayal of his subject's strong brown eyes and their strong gaze that challenges and engages his viewers.

For Dankyi, this style of painting enables the viewer to see the soul of his subjects through the gaze of their eyes. 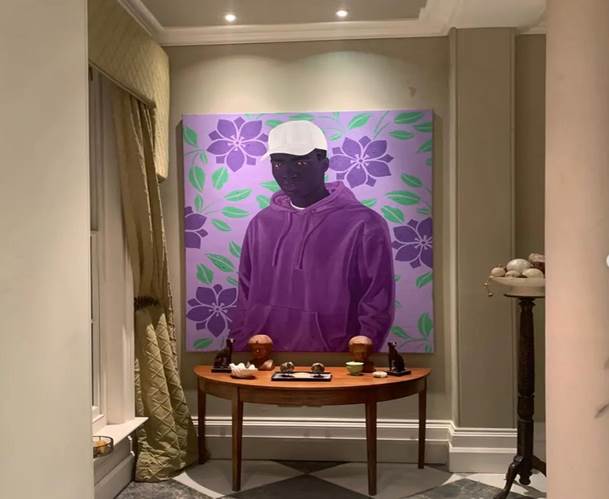 Exploring the vocation of the artist as a social historian, Dankyi highlights the idea of beauty in relation to the black experience. Beauty is always a contested phenomenon! Are we not reminded that “Beauty lies in the eye of the beholder?”

Dankyi’s play with the use of colour, patterns, and texture as means to express emotion, and at the same time to reflect on tradition and globalization, while capturing and documenting the everchanging urban life in Ghana is telling of an artist who has become a force to reckon with. 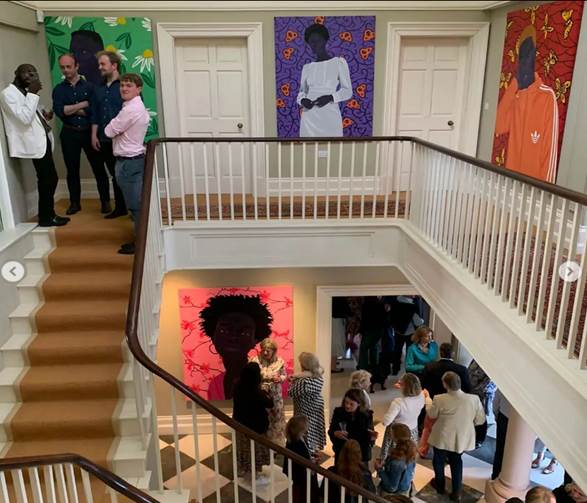 Overall, Dankyi’s works and documentation on KUMERICA offers the viewer a glimpse into his world, highlighting this prominent shift in culture and identity taking place in Kumasi, Ghana. Africa. 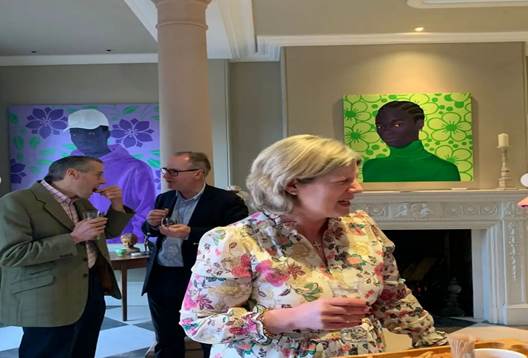 Having recently completed a one-month residency at The Warehouse, in Zaventem, Belgium, Dankyi Mensah’s newest body of work celebrates the very essence of life and beauty through the portrayal of his ‘Kumerican’ subjects. Locating his subjects in the splendor and beauty of flowers, his subjects are painted with beauty, grace, and reverence.

For this new upcoming exhibition on Kumerica, Dankyi’s portraitures are grounded in an artistic language that draws on themes of nature, with his subjects awashed in “flowers” and posing amidst traditional Ghanian patterned fabrics. 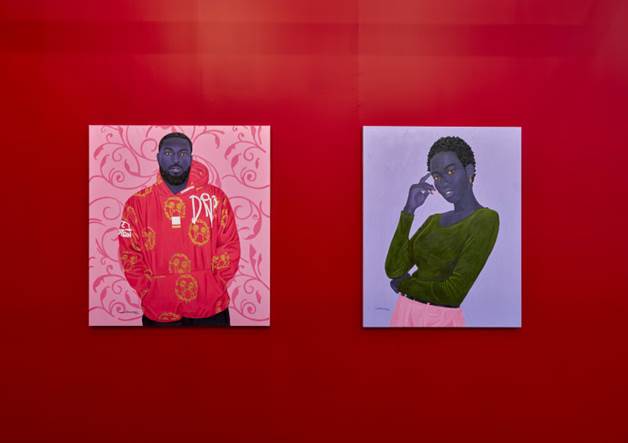 The solo booth Reflections of the Kumerican Experience with works by Dankyi Mensah at Art Brussels: Wednesday 27 April 2022 - Sunday 01 May 2022. Courtesy of the Artist and Murani Mercier Gallery, Belgium.

Overall, Dankyi’s works offer a glimpse about the impact of globalization, hybridization and a prominent shift in culture and identity taking place among the youth in Kumasi, Ghana.

*Nii F. Africanus Armah is an art collector and historian who lives in New York City

Hottest Photo Reports
Catch up with all the political quotes from our politicians.
Advertise here
More from Art & Culture
ModernGhana Links
Annual Akwaaba Festival '22 set to kick off on August 4 to 6
Celebrities must be ambassadors of Ghanaian tourism — Okraku Mantey
Have more confidence in indigenous products - Mark Okraku Mantey
TOP STORIES

Ejisu Roman Catholic School gets water closet for the first ...
38 minutes ago