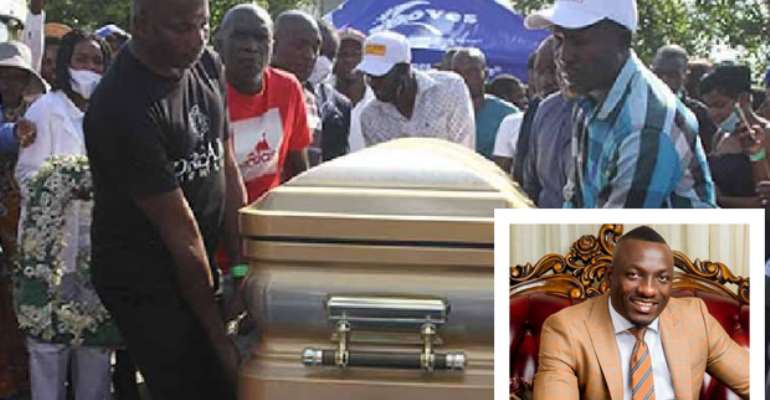 The casket with the remains of Ginimbi. INSET: The late Ginimbi

A 36-year-old socialite and businessman Genius 'Ginimbi' Kadungure who died on the spot along Zimbabwe's Borrowdale Road on November 8 when his Rolls Royce collided head-on with a Honda Fit was laid to rest over the weekend.

According to The Herald, thousands lined the streets on Friday to catch a glimpse of the socialite's funeral procession, complete with a police escort, as it snaked from Doves Funeral Parlour located in the heart of the capital to his Dreams Nightclub before the body was ferried home to lie in state ahead of his Saturday burial at a mausoleum in his multi-million mansion.

Speaking at Ginimbi's all-white burial, Zimbabwe's Deputy Minister of Youth, Sport, Arts and Recreation, Tino Machakaire, who is said to have purchased the Versace coffin estimated to cost Sh880,000 for the late socialite, extended an emotional message of condolence to the family.

“He was a man of vision, a young man who loved his fun and a man who inspired the poor. He lived his life to the fullest and he became the envy of many not just because of his lifestyle but because of his astuteness as a businessman. Many youths have to learn from him and they will definitely miss him, and he was an inspiration to many youths and his death has left a big void which will be difficult to fill,” the Zanu PF legislator for Hwedza South was quoted as saying.