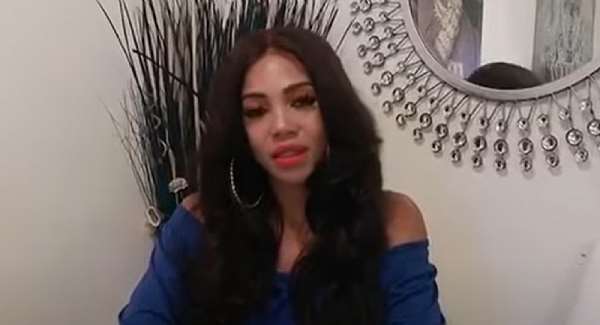 Adrienne Nicole, the Woman in a leaked Sextape with Ghana Rapper and celebrity D’Black speaks after the video went viral. Adrienne is a Philanthropist and American Politician who lives a private and quiet personal life.

Since the said video went viral she has been devastated. About a week ago Adrienne lost her phone at the airport while traveling.

Then a few days later on Monday September 14, 2020 started receiving messages from an unknown individual demanding money, insisting that if not paid they would start posting personal pictures and videos of her and the Ghanaian celebrity.

Adrienne ignored these attempts at extortion and instead reported it to local authorizes in the United States (US) where she’s based. Within 48 hours the individual contacted her again, still demanding payment by end of day or they would start releasing videos of her and D’Black, who also happens to be her ex-boyfriend.

Again, she did not respond, this time forwarding the second correspondence to authorities in the US as well. Then within hours the sextape was leaked online and has since been posted and shared thousands of times across the internet. Due to the overwhelming response to the leaked videos, she made a complaint to the US cybersecurity team to have it taken down from the internet.

She and her team further reached out to news/media and social platforms reporting the videos and asking them to take them down but as soon as a video is taken down, more popup. Her Ghana-based team of publicists under the auspices of BeenieWords.com spoke to Ms Nicole who has since gone dark on social media. During the conversation, she had this to say: “I have no idea how to handle this. This feels like a crazy dream. I cannot believe someone would do this to me and my ex.”

“There are hundreds of pictures and videos of him and I, on that phone and I don’t know what to do if more are released. Those were private moments and memories. We broke up and were taking a break but I never imagined anything like this happening! This was a personal part of my life never meant to be shared with the world and I am still processing what’s happening to me right now”, Adrienne concluded.

Adrienne Nicole is now continuing to work with her local authorities and the authorities in Ghana to authorize the taking down of said videos to keep any more from being leaked.

Watch her video below: