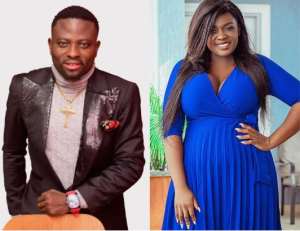 Actress, Gloria Kani who used to be a very close friend of Tracey Boakye earlier in the week opened Pandora’s box when she alleged that aside from the several men Tracey Boakye had slept with, she also slept with gospel singer, Brother Sammy.

She claimed Tracey Boakye slept with Brother Sammy with the intention of getting some cash from him.

The latest allegation is a repetition of rumors that circulated in 2019 that Tracey Boakye was having an affair with Brother Sammy.

However, speaking to Nana Ama Annor on Ghana Kasa on Agoo TV/Kasapa 102.5FM Friday, Brother Sammy stated that though she’s known Tracey Boakye for some time now, he’s never dated the actress and also not the father of her baby as is being speculated.

“I know Tracey Boakye and I even have a new gospel song with her. She’s always present during the launch of my albums and recently she featured me in her movie titled ‘Baby Mama’. She’s a friend but not one that I visit or comes to my house.”

“I’ve never proposed to Tracey Boakye before, let alone have a relationship with her. How on earth can I propose to Tracey? I have only one child, I had the child with my wife who’s in France at the moment. I’m not the father of Tracey Boakye’s child. It is good to give birth and children are a blessing. If the child was mine I would have owned up, what will I have gained from denying the child if I was the father,” Bother Sammy added.