WATCH: Travel the world amidst COVID-19 with Jynna Asiedu-Ofei and her Borga Diaries 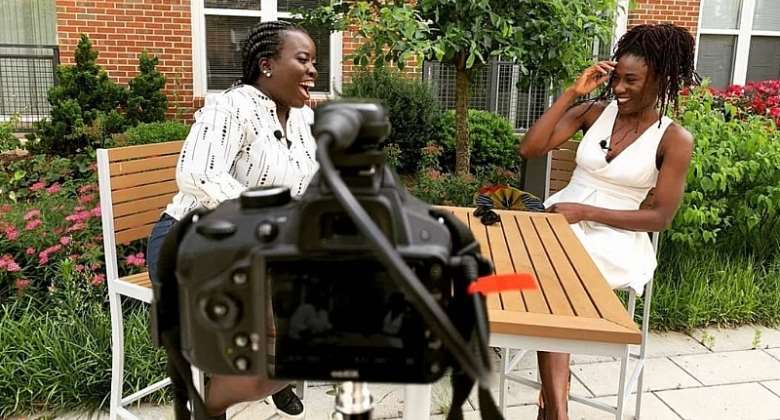 In this age of the novel CoronaVirus, many people all over the world are either forced to stay where they are or have travel restrictions limiting their ability to travel. This new way of living has resulted in many people being forced to stay home and spend more time on their computers and electronic devices. Luckily for all of us, a new YouTube series, titled “Borga Diaries,” created by Jynna Asiedu-Ofei, has entered the online environment.

Borga Diaries is an entertaining online series, capturing the personal and captivating experiences of African travelers around the world. The following interview for TheAfricanDream.net conducted by Afromusion with the creator of Borga Diaries, details the creation and purpose of the series.

Can you tell readers a bit about you and your connection to Ghana: My name is Jynna Asiedu-Ofei. I attended high school at St. Roses Senior High School in Akwatia, Ghana’s Eastern Region. I then completed approximately two years at the University of Ghana before migrating to the United States (US). I currently hold an MBA (Masters in Business Administration), with a concentration in Human Resources Management. I have been working in the Human Resources field over a decade.

How was the idea for “Borga Diaries” born, where did it originate?: As people, when we travel, we always share our experiences with family and friends around a table. The stories become a social event, where you may have people drinking while listening to the story, and also laughing and crying as a result of the story’s complexity. These stories are always interesting, and always include information that most people did not know, with some level of culture shock.

One evening, I was speaking on Instagram with Ernest Oppong Obobisa, a friend who was in the US completing an internship. During our casual conversation, he was telling me about all of his US experiences, the culture shocks, and more, and we laughed uncontrollably over so many relatable things in his stories. After our convo I thought to myself: “there’s nothing on social media talking about funny first-time travel experiences—there’s nothing really on YouTube. People blog about their travel experiences, but there are not plenty of experiences like this shared.” So, the next day, I called Ernest, and I was like, “Hey, I think I have this idea where we should go around and interview people on video and post the videos on my channel on Youtube.”

Luckily, due to timing, two things played in my favor. One, Ernest liked the idea, and he was a free-lance photographer and a cinematographer, so he had some equipment. Two, Corona was wreaking havoc in America, therefore everything was shutting down, so we had a lot of time on our hands to strategize. I asked him to be my cinematographer, I scheduled interviews with people, and we traveled around capturing the interviews on video, and the rest is history.

How did you select the name “Borga Diaries” for your YouTube channel?: In the beginning, we were unsure about the name. First, we thought of the name Yawah Abroad—because we wanted to talk about embarrassing moments abroad. We wanted people to be able to reflect and laugh at their memories. After the first two recordings, we decided to come up with the name “Borga Diaries”, which is pretty much the diary of a traveler because in Ghanaian parlance “borga” is used to refer to folks who have traveled to or lived in developed countries. So, what do you write in a diary? You write about your experiences. So, while we were on lockdown, we were moving around and recording, giving guests the opportunity to tell their borga stories on video.

When I started, I did not have any suitable equipment for creating YouTube videos. For example I did not have lapel microphones, reflectors, lighting… nothing. Amazon became my best friend. I was ordering gizmos and gadgets, and all kinds of equipment online from Amazon weekly.

What makes your YouTube channel unique that will attract people to it?: Everyone who has traveled has a traveling experience and watching this channel will allow people to relate to others’ experiences or relive theirs. And for people who have not traveled before, they can learn something from it. At times, people who have not traveled have a Hollywood-like idea about being and living abroad in developed countries, so this channel will give them a little exposure, in a funny way, to the realities of traveling abroad.

What were your initial thoughts when you started “Borga Diaries”?: When I started, I had doubts. I did not think it would gain traction. I already considered failure before even starting. I was shy to put myself out there, even though deep in me I believed it was a good concept, my fears lingered, but putting the video out has encouraged me to overcome my fear. So far, it has been a blessing after blessing after blessing.

What advice would you give to people who are thinking about starting a YouTube channel?: Do it, it is now or never. Years ago, when I started a YouTube channel, I would get on YouTube, watch a few videos, and watch “how-to” videos on starting a YouTube channel. Every video gave the same advice- start immediately. Now, even today when you go online, you still find videos advising you to start your channel now. YouTube has grown over the years, and it continues to grow. You should start your channel because someone out there is looking for the information you are putting out.

What makes you peculiar from others? It is the content and what we are talking about. I can bet on it that no series talks about funny travel experiences. There are vlogs, but nothing as funny as the content being put out on Borga Diaries right now, don’t doubt me, just watch it for yourself with this short link bit.ly/BorgaDiaries.

What were the hardest moments for you on this journey that made you almost want to give up, and what made you keep going? My fear of people perceiving me in a certain way, and just the fear of putting yourself out there, is what scared me the most. It’s a different level when you decide to put yourself out there on YouTube. The sense of accomplishment and pride I’ll feel tomorrow will outweigh any doubt or worry I feel today.

In 3 to 5 years, where do you hope this channel will be, in terms of growth? The aim is to grow, to a point where it can be shown on national TV, whether in the US or Ghana, or on any major network globally. I would love for this channel to reach diverse populations. As of now, my current videos include travel experiences from Ghanaians who have traveled to Germany, Italy, and the US. I hope to capture more experiences from other Africans who have traveled the world.

Hottest Photo Reports
Catch up with all the political quotes from our politicians.
Advertise here
More Interviews
ModernGhana Links
Stop stealing songs – Songwriter to 'lazy' musicians
I Want To Use Music To Connect To My Fatherland — Fadu
Vodafone Ghana Music Awards 2021: Diana Hamilton Grabs 6 Nominations
Ladies are not Ready to Build with any Man...Flora Jacobs
Salma Mumin Debunks Rumour That She Removed Her Butt
Teni: Humanity Over "The Industry"
We Had Sex In A VIP Bus---Fameye Recalls Regrettable Experience
All Those Who Made Promises At My Father's Funeral Have Not Fulfilled Even One--Late George Forest Son
Bosom P-Yung Appeals For Funds
TOP STORIES