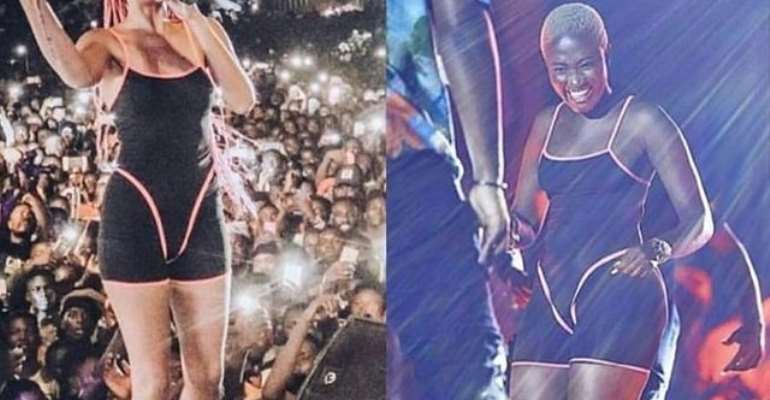 According to him, Fella Makafui admires Sister Derby to the extent that she imitates her fashion sense among other things.

He said this is to make her unique and relevant on social media.

Speaking on 3FM, Wanlov urged Fella Makafui to be her own self.

“I think this happened a long time ago. I think she [Fella] likes Derby and she emulated her looks to the extent of even getting her boyfriend. I think she is some clone or kind of chameleon.”

“If she is who she appears to be as, a strong-willed person, she will find a way to stop coping and be her own self to keep evolving. Inspiration and mimicking are two different things,” Wanlov said.

Medikal broke up Wanlov’s sister , Sister Derby for actress Fella Makafui after dating her for over two years.

The news of them breaking up flooded social media and broke lots of hearts because people were expecting them to tie the knot.

There were lots of speculations with regards to what led to their break-up but one that stood out was Fella Makafui. Most of the reports said Fella snatched Medikal from Sister Derby.

In a chat with Graphic Showbiz, Medikal, real name Samuel Adu Frimpong, had this to say about their break-up:

“Everything you hear about me, Sister Debbie, Fella Makafui is true. Sister Debbie and I are no more together, I do not want to go into details.

“I would just say it is way deeper than what people think; a lot has gone on. The breakup did not happen today, it happened some time ago, and it is just unfortunate that people are now getting to know it.”

To confirm rumours that they are no longer together, Sister Derby released ‘Kakalika Love’ against Medikal and Fella Makafui.