Fella Makafui Is Not Mad At Me – Medikal 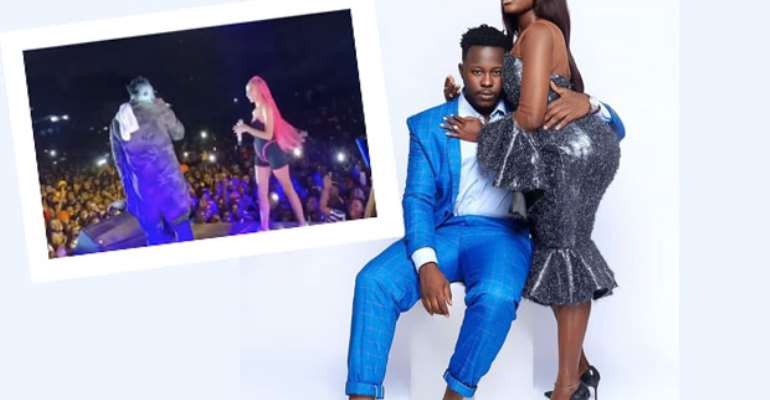 Rapper Medikal has denied claims that his girlfriend Fella Makafui was mad at him for performing with his ex-girlfriend Sister Derby at his 'Welcome To Sowutuom Concert' last weekend.

He, however, told Hitz FM that the performance with Sister Derby was not planned.

“It wasn’t even planned, it just happened,” Medikal said.

The 'Father' hitmaker added that the claim Fella Makafui was unhappy about Sister Derby's appearance at the concert was untrue.

Sister Derby joined Medikal on stage at his concert on November 30 to perform their hit song, 'Too Risky'.

Her appearance took many fans by surprise as they were not expecting the ‘Uncle Obama’ singer to show up after her break-up with Medikal.

Many had also assumed she would feel uncomfortable with Fella Makafui in attendance.

However, the two went ahead to entertain fans with the song they had recorded to celebrate their love while together, ‘Too Risky’. The two first performed together at the Shatta Wale's 'Wonderboy' album lunch.

According to Medikal, they are entertainers and are willing to entertain fans regardless.

“For me, my main purpose is to be happy and make the lives of other people a happy one,” he added.

Medikal added that he had talked to Strongman and he also showed up to support.

According to him, he was overwhelmed by the support shown him at the maiden 'Welcome To Sowutuom Concert'.