The Blakk Rasta Journal Ghana Never Had Found In Timbuktu 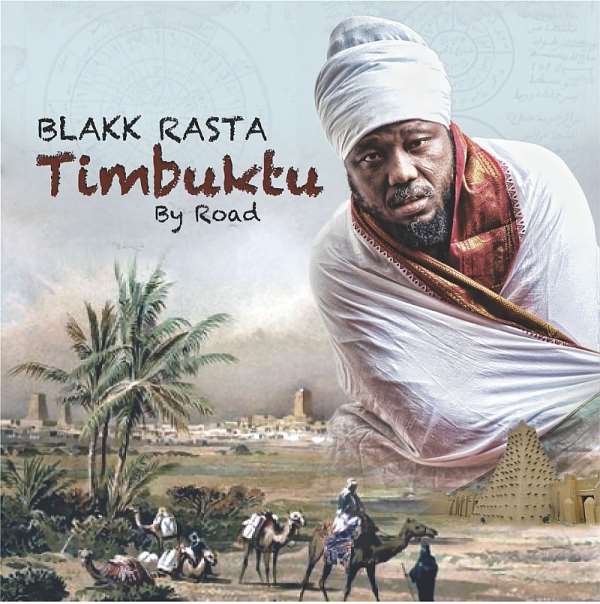 The fact that Ghana's Kuchoko Legend, Blakk Rasta has released a 32-song album is no news anymore but what is news is the fact that the hidden treasure in it has been unearthed on the journey to Timbuktu.

I had heard about the album release and my first comment was that Blakk Rasta had gone crazy to give too much on one album. I told myself that, probably he wanted to retire and concentrate on his university lecturing et cetera. Two, I told myself that this album would be trashy as a few other albums that were released just before were nothing good to write home about. Alas, I was wrong.

After VOA interviewed the artiste and played a number of his songs a couple of weeks ago, coupled with the fact that former British High Commissioner to Ghana, Jon Benjamin boasted that he was the inspiration behind the lyrics on this album, I decided to check out the album. I was mesmerised by the sound quality, lyrical power, composition, concept, and production.

TIMBUKTU BY ROAD is a title inspired by Bob Marley's Babylon By Bus album. It kickstarts with Dumb Trump which sees a plethora of well-arranged horns seducing the song which it rides on a bassline that flows like early morning milk from a country cow. Beautiful melody.

Kofi Annan Says is undoubtedly a marijuana anthem for marijuana advocates. The composition is crisp and the production is just as great. It has a contemporary one-drop Reggae beat just as Dumb Trump.

The Kuchoko side of the album is judiciously produced with no compromises on quality. It was recorded live unlike what we hear nowadays full of samples and computerised beats and tones. This is a great work of art.

Songs like Mma Chebsi Ma, Ashei Lala, Racists in Uniform have live, mechanical drums, bass and horns you will appreciate as a lover of quality, real music. Tears Keep Falling is a song lovers of Lovers' Rock will fall in love with.

Blakk Rasta takes you back to the good old days of Lovers' Rock djing on this. Jameela is a song which will keep you repeating over and over. It is infectious! Jangbari-Zo is my tune. It has melody and style. It borrows melodies from Igboland and Yorubaland with a bassline that sounds like a mad, hungry lion on the loose at a circus. God forbid. It has two versions. I love the one that is not the original.

The Kuchoko Dance side thrives on quality African rhythms injected with beautiful instruments like the talking drum, Xylophone and Kora. This side of the album will get you dancing like you just won a lottery. My favourites here include Taakama, Saadia, Tuo Zaafii and Hajia, Dede and Emefa will get you to go back to music school and learn a few grooves. These two are so creative you will struggle to find a genre for them. That is Kuchoko Dance, Blakk Rasta says.

Timbuktu By Road has distinguished itself as the mother of all albums I have heard in Ghana. It is the album Ghana has never had. It has live instruments, variety, creativity, lyrical power, quality production, and sufficiency in terms of the number of songs. It is, in fact, bigger than an album, it is a JOURNAL. Yes, a journey of organic music in an era of disposable music and Andrew Liver Salt music which go extinct after just a few days.

If you doubted like me, Blakk Rasta has given us a Grammy album, nomination or no nomination. It is a treasure antiquated by an album cover that only Blakk Rasta will endorse. Grab a copy and I dare you; if you find a song on the album you do not like, I will eat my head. Congratulations, you have a treasure of a journal. Enjoy the diverse Kuchoko journal.

PHOTOS: Ghanaians hit the streets of Accra for #FixTheCountr...
26 minutes ago