2019 Odwira To Climax With Concert At Aburi Botanical Gardens 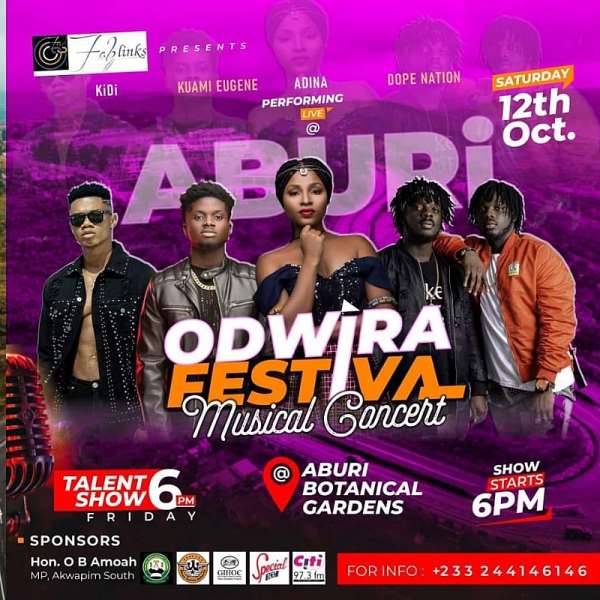 The 2019 Odwira Festival will climax with a concert on Saturday, October 12 at the Aburi Botanical Gardens.

Artists set to perform at the concert are Kuami Eugene, Kidi, Adina and Dope Nation.

According to the organisers (Fablinks), this year's event will deliver back-to-back performances from all the artistes billed for the event.

Kidi is expected to rock the stage with some of his hit tracks such as 'Odo', 'Adiepena', 'Thunder', 'Never Again', 'Say You Love Me', and Sugar' whiles Adina, Kuame Eugene and Dope Nation would also dazzle patrons with tracks such as Cofusion, Makoma and Zanku .

Ahead of the main event on Saturday, there will also be a talent hunt show on Friday, 11th October.

The Odwira Fetival is mainly performed by people of Akuapem, Akwamu and sometimes the Akyem. The Odwira celebration begins at the end of the 40-day meditation period by chiefs and elders of the traditional area.

Six weeks to the festival, a ceremony called “Adae” is performed at the Adontenhene's palace, highlighted by a ban on drumming and noisy making, so that the gods can rest while people fortify themselves spiritually and materially for the celebrations ahead.

All Adonten stool houses in the towns and villages perform their own ceremonies before coming together for the grand Adontehene Odwira at Aburi-Ankaase.