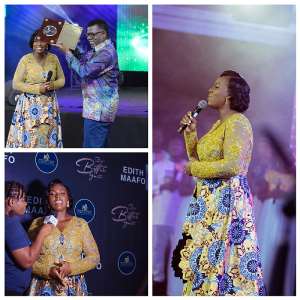 The support received by Edith Maafo was amazing and she lived up to expectation. Edith Maafo, touted to be Ghana’s version of Sinach or Cece Winans was impressive and lived up to her bidding without a shadow of doubt when she commenced the show with the song “Child of God” after Koda had wowed the audience with his popular song “Hossana’.

Her next song “Bigger Better Greater” had the audience on their feet in worship. The songs are world class and underline Edith’s creativity and knack for scriptural based songs lacking in Christian music today. Her performance was world class, but it is the hymn “Lead Me On” that will no doubt make Edith Maafo a household name in gospel music.

Edith has waited for so long to come up with her first album but it was worth the wait. Edith’s voice, poise and performance is testament to experienced musical talent.

The “Bigger Better Greater” album has indeed launched Edith on the world’s stage as an outstanding gospel artiste and song writer.

Dr. Mensa Otabil, after receiving a plaque of honour and recognition from Edith in his remarks, said he had had a direct input in the making of the album.

Her husband Frederich Maafo in his vote of thanks admonished the church to push gospel music further if gospel music was to make great impact in the world.

He lamented the challenges gospel music faced given the good patronage of mainstream music as opposed to gospel music in our part of the world and felt strongly that the church had a responsibility to support and promote gospel artistes.

The feedback on social media from those who witnessed the outstanding concert is proof that in Edith, Ghana has found a gospel superstar.

Edith’s album “Bigger Better Greater” is now available in all online music stores and can also be downloaded from her website www.edithmaafo.com using SlydePay or MTN Momo.