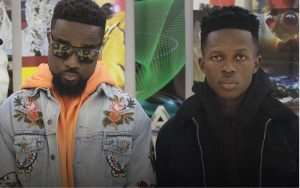 Ghanaian rapper Strongman has revealed that he believes the main reason behind Sarkodie’s refusal to extend his contract at Sarkcess Music was as a result of the “perception that he was killing” his music career.

Strongman, who made an appearance on the popular Vim Talk Show with Afia Pokua explained that he believed Sarkodie “felt very bad” when people accused him of doing very little to help his music brand and career ultimately resulting in the split.

“If I were in the shoes of Sarkodie, I would have felt bad because of what the public said about his killing of my career,” the young rapper said.

Strongman, who has also been trending for the last two weeks due to his beef with colleague rapper Medikal insisted that he is a far better rapper than Medikal.