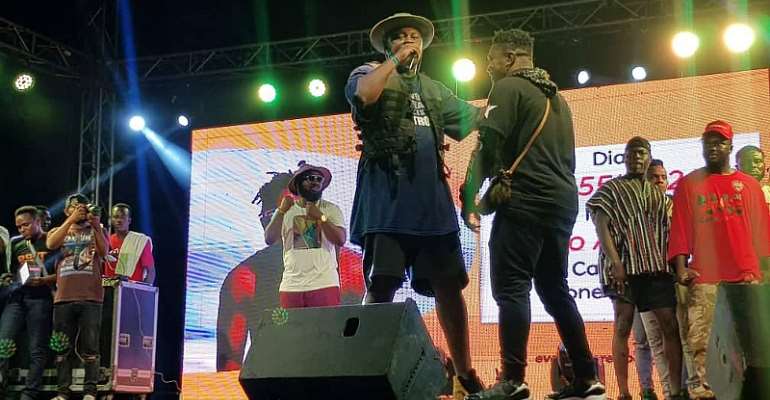 The annual largest congregation of Muslims to celebrate the end of Ramadan; Sallahfest came off on the streets of Nima on Wednesday 5th June, 2019.

The early morning of the day saw the Muslims offer prayers after which followed the feeding of eight thousand people on the same streets. Later around midday, there was the parade of the various sub-chiefs within the Nima community, each with their entourage.

The entire month long event came to an end with the musical concert later in the evening with VVIP as the host group who treated the audience to their numerous hit songs from their days as VIP to their current VVIP state.

The crowd could not hold their excitement but cheers them on and also sing along all the songs they performed as people from among the community who have made it to the limelight in their chosen field.

This year’s concert saw a host of big names in the Ghana music industry troop to the venue to support their brothers entertain the audience as they end another fasting month in the year. Naes such as the Lynx Entertainment stars Kuami Eugene, Kidi and Dope Nation thrilled the audience to their various hit tunes.

The crowd could not have enough of these great acts as they stood and sang along every single song from beginning to the end. Other great names who were present at the concert were Kwaw Kese, Edem, Samini, Tic, Medikal who was joined on stage later by his “Godfather” Criss Waddle, Rudebwoy Ranking, Kelvinbwoy and FBS.

The only lady among the men and the reigning New Artiste of the Year at the just ended Vodafone Ghana Music Awards, Wendy Shay also came through to deliver some thrilling performances including her latest hit with Shata Wale “Steve Wonder”.

Preceding these great names were many underground artistes who one major reason for the concert. VVIP as a group have taken it upon themselves to give these artistes who come from within the community the platform to also unearth their musical talents to the amazement of the audience as they aim to grow their in their craft and also climb up to the top just as they have.

The one month event had other activities such as Football and Quiz as well as recitals among the various Zongo communities to build and sustain interest towards the main sallah day.

All these activities were made possible by VVIP and their Chapter O friends and powered by EXP Ghana, part of the Africa’s leading experiential agency, EXP Group.