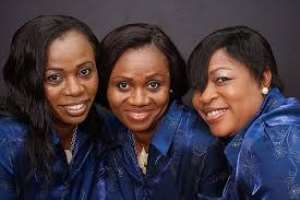 Legendary Ghanaian Gospel music trio, Daughters of Glorious Jesus, as part of measures to celebrate their thirty years of existence in the music Industry has announced a line-up of activities.

One of their major activities is to embark on a sanitation campaign in Accra.

Explaining the purpose for the campaign at a press launch held at the Golden Tulip Hotel in Accra on Wednesday, May 1, 2019, the group said, "the campaign is our contribution to ensuring Accra is clean. We will educate people on the need to keep the environment clean."

They further urged residents of Accra and environmental stakeholders to support their commitment to rid Accra of filth.

Apart from the Sanitation campaign, a symposium would be held to share experiences of their music journey and wrap it up with a concert dubbed ‘Glorious 30 concert’ in Accra and Kumasi in December.

Daughters of Glorious Jesus is made up of Cynthia Appiadu (lead singer), Edna Sarpong, and Monica Owusu Ansah. Cynthia, the youngest, writes and composes most of the songs of the group.

They started as part of the choir of the Resurrection Power and Living Bread Ministries, then headed by the late Rev. Francis Akwasi Amoako in 1987.

Later, the General Overseer of the Church, Bishop Akwasi Asare Bediako, saw their potential and encouraged them to form a group. They proceeded to minister through song at various church crusades and conventions.

Their debut album was 'Anwanwa Do', released in 1990. Since then, they have won awards consistently through a number of albums and hit songs.