‘I’m Too Big to Fight Over Awards’: Joyce Blessing 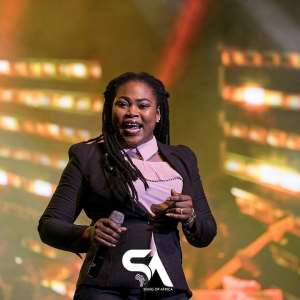 On the Late Night Celebrity show last night on ETV, multi-award-winning gospel musician Joyce Blessing indicated that she is too big a brand to fight over awards.

Joyce Blessing was asked whether she was comfortable with her two nominations: Gospel Artiste of the Year and Gospel Song of the Year at the 2019 Vodafone Ghana Music Awards.

The Repent hit-maker told the show host Foster Romanus that she has won for herself 22 awards just within 6 years in the gospel ministry and hence not necessary to fight over awards.

‘I’m a big artiste, my brand is huge so why would I go around gallivanting and fighting back at organizers because of awards’: She Replied.

The gospel crooner added that being presented an award is a sign of honor and hence it wouldn’t be necessary to fight when organizers do not want to honor you.

Joyce Blessing was on ETV to promote her new singles; Repent and Di Asa which is indelibly making waves in Africa after release.