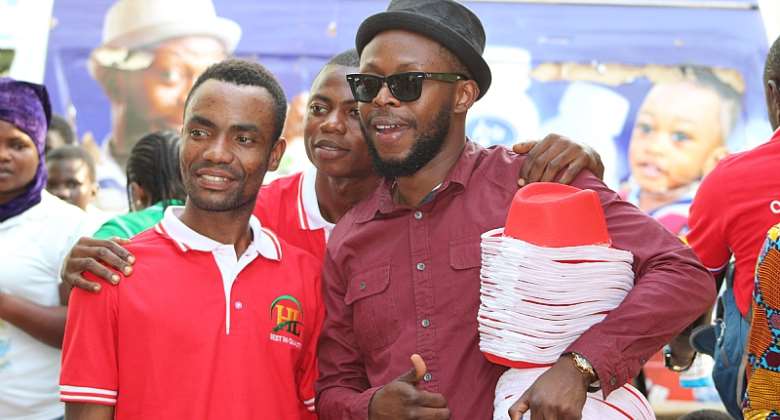 Orkman Ghana Limited, a Ghanaian company which deals in electronics and importation has made donations worth thousands of cedis to less-privileged in Bawjiase.

A team from Orkman Limited, importers of high-quality electronics and other household needs, led by comic actor Kalybos donated foodstuffs and household needs worth thousands of Ghana Cedis to people in Bawjiase, a town in the Agona West Municipality of the Central Region on Saturday, 15th December 2018.

Kalybos who also doubles as the brand ambassador of Orkman Limited, speaking at the event mentioned that putting smiles on faces is an epic moment for him and he finds the donations as a way of giving back to the society. He also called on his fellow celebrities to emulate the trends he is setting through Orkman Limited to support the needy in society.

On his side, Mr. Christian Okomanyi, the C.E.O of Orkman Limited said it is part of their policies that yearly they distribute part of proceeds from the company to less-endowed individuals in the society. He mentioned that they plan on visiting more orphanage homes in future God willing.

The manager of Orkman Limited, Mr.Hayford Okunji also mentioned that Orkman Limited believes so much in the future leaders so they feel fulfilled to be linked with supporting children who are the leaders of tomorrow.

According to him, if we continue to do less to support the young ones yet we continue to preach against crime, we may not be doing ourselves any good as we may not get the results we need. Mr. Okunji also concluded his statement by calling on all companies and individuals to consider annual donations to the less-privileged.

Asked about his career and where he hopes to see himself in future, Kalybos said he hopes to hit the world stage soon.

‘’This year alone, I have shot about eleven movies and most of them have been blockbusters when premiered. I still have some others which have not yet been premiered. I went to Nigeria to shoot and we came down to Ghana to shoot a Nigeria-Ghana Collabo. I pray that 2019 will be bigger for us.’’ He added.

Kalybos also promised his fans to watch out for more of his famous 'Adventures of Kalybos’ Skits as they prepare to bring them a special Christmas episode with more actors and actresses.

Orkman Ghana Limited is a registered Ghanaian company which deals in electronics and importation. They are the importers of Anna Cooking Oil and Anna Perfume Rice. They are also the producers of Kris milk drinks which is a highly-patronized fruit drink in Ghana produced in various flavours; coconut, banana, vanilla and sugar-free almond. Locate their warehouse at Agbogba close to Agbogba police station. Their main office is at Botwe old town total filling station and their car garage is located at Hatso close to KFC.

See photos from the donation exercise below: