Agya Koo in trouble...Muslims angry over his movie 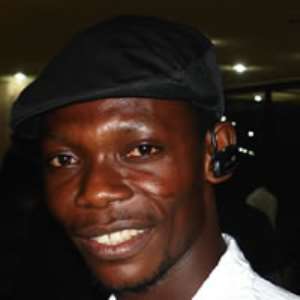 
Mallam Issah, a popular movie in which Adu Kofi also called Agya Koo, posed as a Muslim cleric has incurred the displeasure of the Muslim community in the Kumasi metropolis.

The United Forum for Islamic Affairs, a movement for all Muslims (AI-sunna Waljamah, Tijaniyya, Council of Zongo Elders, etc), has demanded the withdrawal of this and others like Rakiya, Asante Kramo and Agya Koo Makaranta as well as related advertisements from the market.

This followed an emergency meeting on Tuesday organized by the Ashanti Regional Security Council (REGSEC) with the Film Producers Association of Ghana and the United Forum for Islamic Affairs at which the film makers apologised to the Muslim community and agreed to have the movies withdrawn.

The timely intervention of the REGSEC averted a possible mayhem in the metropolis as some irate Muslim youth had planned to attack the film makers for ridiculing Islam in the films.

Present at the meeting were Sheikh Kamil Mohammed Kamil, Regional Imam for the Al-Sunna Waljamah, Mallam Yusif Alhassan, Chairman for the United Forum for Islamic Affairs and executives of the Film Producers Association.

The Muslim leaders accused the film makers of using the movies, to cast a slur on the integrity of Muslims. In direct reference to the Mallam Issah movie, they said that Agya Koo was not performing salat (Muslim prayer) with any seriousness because he was fighting while praying.

Again they said a Mallam is a scholar who has studied and understood the principles of the Islamic faith such that he can impart knowledge to others but the character in the film was not.

Mallam Yusif said the Muslim community is sad that in the film, Christianity is portrayed as superior to Islam in the character of the reverend father but Mallam Issah is portrayed as somebody in the Stone Age.

The Muslim leaders therefore cautioned film makers to be wary of movies and music which attack other religions and advised them to consult relevant authorities before embarking on film projects.

In a letter dated December 8, 2010 the film makers rendered an unqualified apology to the Muslim community for any embarrassment the films might have caused them.

Signed jointly by Augustine Abbey and Stanley S. Sackey, chairman and secretary respectively of the film producers association, the letter partly read: “... we the producers wish to render our unqualified apologies to our brothers in respect of protest against some of the scenes in our movies.

"We also wish to emphasize that it has never been our intention to ridicule the Muslim religion or for that matter any tribe. Whatever happened was out of ignorance on our part and we wish to put it on record that as far we are concerned, it will not happen again."

The letter which was copied to the Regional Minister, REGSEC and the Office of the Zongo Chief stressed that, "it is our belief that our sincere apology will be communicated to all the Muslim communities in the country toward a peaceful co-existence.