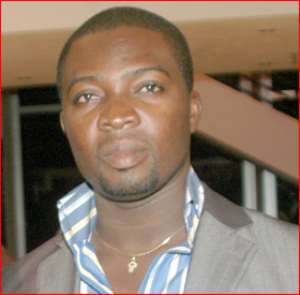 Ghanaian/Nigerian movie director, Frank Rajah has reacted to allegations that he had raped, molested, and sexual assaulted a Nigerian house-help, whose name was only given as Chinemelu, while shooting in Asaba, Delta State, a couple of weeks back.

In a telephone conversation with NEWS-ONE on Monday, he denied the allegations, saying it was a ploy to injure his hard-won reputation.

He said he suspected that the story was put out there by some of his competitors in Nigeria who might not be happy with his exploits in the movie industry.

“I was not shocked when I heard the allegation. Absolutely, nothing like that happened. Nothing of such happened,” said Rajah.

According to Nollywoodgists.com, the website which broke the story, Frank was in Nigeria in the first week of March to shoot a movie for Immortal Films Company in Asaba, Delta State.

The website indicated that the house that accommodated them was used for some major shots and in the course of carrying out his responsibility as a director on set, he had the opportunity to move around the place.

“Frank found time to play with the housemaid whenever their hosts left for their offices; they were either found smiling at a corner or he asked the young but beautiful girl to pick one or two things for him, most times.

He would leave whatever balance of money to the girl to keep as a tip. All this was to get the attention of the little pretty girl and this continued for the number of days we worked in that house,” the website claimed it was told by an eye witness.

At a point, the story indicated that the little, naive and helpless house-help did not know how to refuse the pressures from Frank.

Plus, she was carried away by the glamour and presence of top movie idols around, to the extent that she even prepared delicious delicacies for Frank whenever her 'masters' stepped out of the house for the office.

It said the main drama unfolded a day after they were through with the house scenes shooting. Frank Rajah reportedly whisked this Chinemelu, suspected to be an under-aged girl,  to his hotel room in the centre of town when her boss and madam had gone out, and had sex with her.

The report said Raja's girlfriend Esther, an upcoming artiste, who happened to be part of the cast, walked in at that moment and she nearly caused a commotion.

“She started giving the two lovers punches and they started running for their lives; but not until Esther ensured she gave the little Chinemelu a disfigured face,” the story said.

Like wildfire, the rumour quickly reached the masters and the girl had no option but to spill the beans. The masters ordered for the arrest of Frank but when they got to his hotel room, he was nowhere to be found. It was later discovered that he had returned to Ghana.

Chinemelu, the site claimed, has been asked to leave for her parents' house while Rajah has been branded a persona-non grata in the Nigerian movie terrain, the website claimed.

Even though Frank said he was in Nigeria and confirmed knowing the said Esther, he said she was not his girlfriend.

“Yes I filmed in Asaba but nothing of such happened. I finished and I left to Ghana. Nobody had called to ask me anything about the story. If Fred Nuamah had not called to break the news to me, I wouldn't even know there was something about me out there. It is a lie,” he told NEWS-ONE. Source: NewsOne

UTAG Strike : All 15 branches to continue strike
22 minutes ago