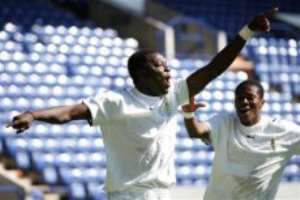 Ghana's Black Stars recorded a comfortable 4-1 win against the Reggae Boys of Jamaica in an international friendly played at The Walkers stadium in Leicester.

This is the second win for the Black Stars this year having failed to record a victory in their last four outings.

The Black Stars produced a sterling performance right from kick off stroking the ball around with precision and exhibiting good inter-positional play.

Midfielder Sulley Muntari shot the Stars ahead in the 5th minute.

A move from the right flank was back heeled by Matthew Amoah into the path of Asamah Gyan whose shot at goal was spilled into play by the Jamaican goalkeeper allowing to Sulley Muntari finish off with a cool tap in.

The Black Stars made it two from the boot of captain Stephen Appiah in the 18th minute after connecting a non drop shot. The ball deflected off Jamaican defender Damion Stewart to give Ghana a 2-0 lead going into the break.

Back from recess, the Reggae Boyz started off as the better side and pulled a goal back in the 58th minute through Jason Euell who tapped in from close range.

The Jamaicans continued to press for the equaliser but the Black Stars caught them on the counter with Stephen Appiah firing from the edge of the box to beat the goalkeeper in the 66th minute.

Two minutes later, Matthew Amoah was on hand to increase the tally to four scoring from close range.

After the fourth goal, Ghana coach Ratomir Dujkovic made four changes to the team.

The Jamaica fixture was the second of three warm up matches lined up for the Black Stars before the World Cup commences.

The team will move to Glasgow for the last friendly against South Korea on the 4th of June.