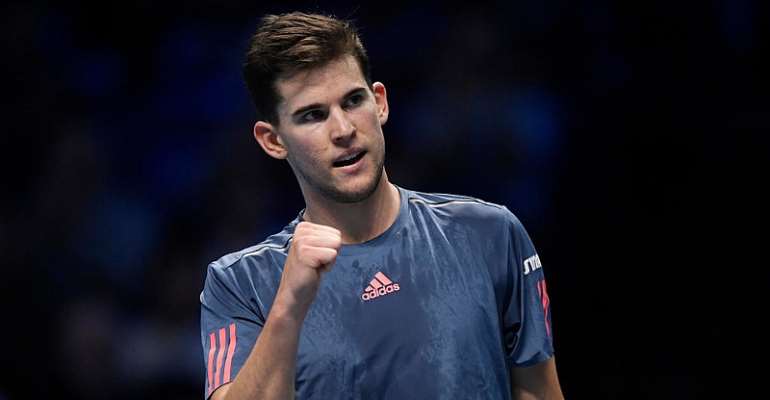 World number three Dominic Thiem has questioned the viability of a plan for the tour's star performers to share their fortunes with lower ranked players struggling financially during the shutdown caused by the coronavirus pandemic.

Last week the Australian Open champion, Novak Djokovic, revealed that he was working with other multiple Grand Slam tournament winners, Roger Federer and Rafael Nadal, to organise aid for the circuit's makeweights.

But during an interview with Austria's Krone newspaper, Thiem appeared to break ranks with his multimillionare colleagues.

"Quite honestly I have to say that no tennis player will be fighting to survive, even those who are much lower-ranked," Thiem said. "None of them are going to starve."

Early experience
The 26-year-old Austrian has amassed more than 20 million euros in prize money since turning professional in 2011.

He said that his experience competing on the sport's third tier Futures circuit during his late teens had shown him that tennis was not a priority for everyone.

“There are many, many players who don't put the sport above everything else and don't live in a professional manner,” Thiem said.

"I wouldn't really see why I should give such players money. I would rather give money to people or organisations that really need it,"

Djokovic, who serves as president of the player council on the Association of Tennis Professionals (ATP), suggested contributions from the world's top 100 male players into a 4 million euro fund.

The ATP, which runs the men's circuit, and the four Grand Slam tournaments in Melbourne, Paris, London and New York would also contribute.

“I know that everyone is struggling financially in these circumstances,” Djokovic wrote in a letter to players.

“Of course, some more, some less. I feel like this is the way for us to show great unity, understanding and compassion for our fellow players who are trying to make a living or at least not lose money in tennis. Please try to recognise this as an example for the future generations.”

Three champions
Since Federer won his first Grand slam title at Wimbledon in 2003, he, Djokovic and Nadal have claimed 55 of the subsequent 66 Grand Slam tournaments which offer the biggest purses in the sport.

The troika has racked up just over 300 million euros in prize money alone.

"None of us top players got anything handed to us, we all had to fight our way up," Thiem said.

"I don't have the guarantee in any job that I will do well and earn lots of money, that's my opinion on the matter," he said.

While Thiem wrestles with the issue of handouts, Nadal on Sunday reiterated his fears that the 2020 season could be over.

Season in jeopardy
"From my point of view, I'm very pessimistic that the circuit can resume a normal activity,” said the 33-year-old Spaniard during an interview organised by the Spanish tennis federation.

"In tennis, you need to travel every week, stay in hotels, go to different countries," Nadal said.

"Even if we play without an audience, to organise any event you need a lot of people involved, which cannot be ignored. At an international level I see a serious problem."

Nadal won his 19th Grand Slam title in New York in September. Twelve of his prizes have come in Paris at the French Open. That tournament, normally slated for the end of May, was postponed until the autumn due to the coronavirus.

French Open organisers want to run the event just after the US Open.

In a recent interview with Spanish radio, Nadal said he felt it would be difficult to stage one of the majors in the short or medium term.

"We have had a very tough month and a half, with many irreparable losses as well as others that are less important that will still bring great suffering to society," he said. "These are sad moments when you see so many people dying."