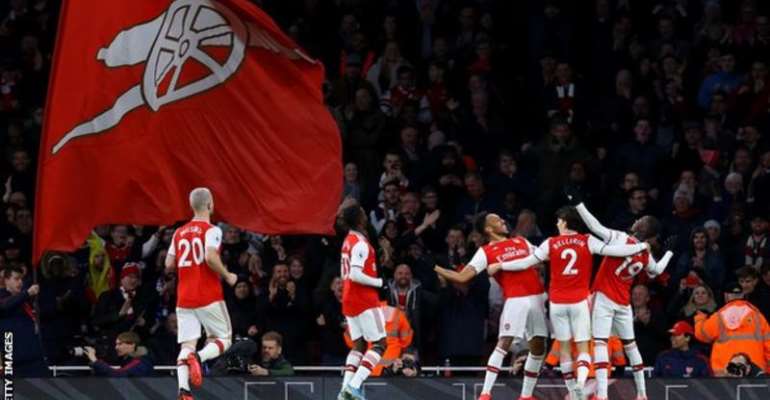 Arsenal have not played in the Champions League since 2016-17

Arsenal players are set to be the first in the Premier League to agree to a pay cut after being offered Champions League qualification incentives.

The Gunners players will take a 12.5% wage cut but be reimbursed if they qualify for next season's Champions League or the 2021-22 competition.

They will get a £100,000 bonus for reaching next year's Champions League.

The Gunners were in ninth place in the Premier League when the season was stopped because of the coronavirus pandemic, eight points adrift of a Champions League place with 10 games remaining.

On Wednesday, the Arsenal executive team agreed to waive more than a third of their salaries over the next 12 months.

Private discussions have taken place with the players over the "potential financial challenges ahead", with negotiations on wage cuts taking place on a club-by-club basis.

The decision came after league-wide talks aimed at a collective pay deal broke down without resolution.

The Premier League proposed a 30% pay cut, but the Professional Footballers' Association said that would affect tax contributions to the NHS.

Arsenal said in a statement earlier this week "our owners, Kroenke, Sports & Entertainment, are fully committed to supporting Arsenal through this challenging time".

They confirmed their fans will receive credits or refunds if matches are played behind closed doors or cancelled.

Season tickets and single match-day tickets at Arsenal are among the most expensive in the league, meaning the Gunners face paying back more than most other clubs.