Picking An African Dream Team Who Played In Spain 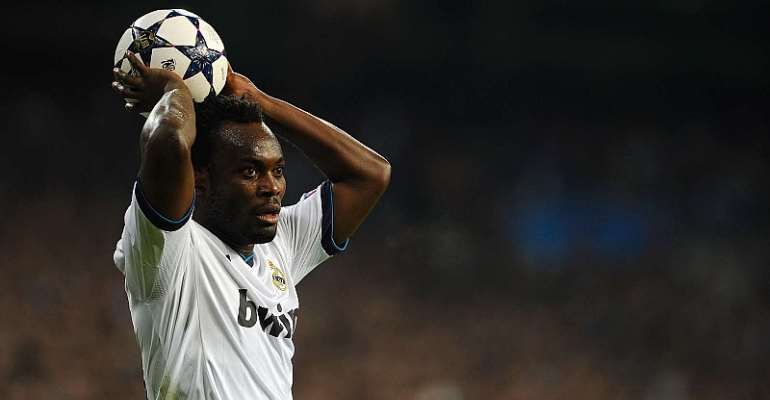 The Cameroon stopper spent nearly a decade in Spain with Espanyol, having earlier achieved success in Africa with Cameroon giants Canon Yaounde.

The two-time African Footballer of the Year is one of the greatest stoppers ever to emerge from the continent, and was a Nations Cup winner with the Indomitable Lions in 1985.

He also represented the Central Africans as first-choice in two World Cups, conceding just once in the 1982 as they bowed out unbeaten.

Lauren was still playing in Spain when he won a Nations Cup and Olympics double with Cameroon in 2000.

However, it was only after moving to Arsenal, following spells with Sevilla, Levante and Mallorca, that he truly established himself as one of the finest African players of his generation.

Converted into a full-back by Arsene Wenger, Lauren nabbed two English titles and three FA Cups and has been immortalised by his place in the Gunners’ Invincibles.

He’d already won two Spanish titles and the 2009 Champions League at the time of his departure, but enjoyed his finest years in the Premier League, where he was a key figure in the building of modern Manchester City.

Toure won three titles and the 2011 FA Cup—where he was a key protagonist—at City, and won a record four consecutive African Footballer of the Year awards.

One of the classiest defenders ever to emerge from Africa, Naybet was once wanted at Manchester United by Sir Alex Ferguson, and wouldn’t have looked out of place in that star-studded side.

He won La Liga with Deportivo La Coruna in 2000 and featured for Morocco in two World Cups.

An underrated talent who boasted versatility and no little skill, Geremi achieved great success in Spanish football with Real Madrid.

He twice won the Champions League with Real before moving on to Chelsea where he would enjoy further success.

At international level, he clinched two Africa Cup of Nations titles with Cameroon—in 2000 and 2002—and would also win gold at the Olympics with the Lions.

The Mali powerhouse doesn’t get the credit he deserves for the consistent success he enjoyed in Europe with Olympique Lyonnais and Real Madrid.

Between 2002 and 2008, he won a league championship—either Ligue 1 or La Liga—in each season, and helped end Los Blancos’ wait for a Spanish crown.

He twice reached the Afcon semi-final with Mali.

Essien was a late arrival in the Spanish game, joining Real Madrid to reunite with mentor Jose Mourinho after the pair’s earlier success together at Chelsea.

By this point, injuries had limited the Bison’s effectiveness, and it’s tantalising to imagine just what a player he could have become had he stayed fit.

Injuries denied him a role in Ghana’s run to the 2010 World Cup quarter-final, although the one-time BBC African Player of the Year did win the Champions League and two Premier League titles at Stamford Bridge.

Yekini played for a dozen different clubs during his 24-year career, with a brief spell at Sporting Gijon coming in between moves to Olympiakos and Vitoria Setubal.

The Bull of Kaduna wasn’t a massive hit in Spain, moving on again after only three La Liga goals.

He enjoyed the best form of his club career in Portugal, during his first stint with Setubal, but of course his career highlights came with the Super Eagles, as they clinched the Nations Cup in 1994 and made their World Cup bow later that year.

A Champions League winner with Jose Mourinho’s FC Porto in 2005, McCarthy moved to Blackburn Rovers in 2006, where he translated his excellent goalscoring form to the Premier League.

Before moving to Portugal, he spent several campaigns in Spain with Celta Vigo, but struggled to translate the form he’d demonstrated at Ajax, where he was a league champion in 1998.

en moves to Olympiakos and Vitoria Setubal.
The Bull of Kaduna wasn’t a massive hit in Spain, moving on again after only three La Liga goals.

He enjoyed the best form of his club career in Portugal, during his first stint with Setubal, but of course his career highlights came with the Super Eagles, as they clinched the Nations Cup in 1994 and made their World Cup bow later that year.

Another four-time African Player of the Year, Eto’o is one of the finest players to ever feature in Spanish football, and was a key figure at Barcelona for five years after earlier spells with Real Madrid and Real Mallorca, where he remains the club’s all-time top scorer.

A remarkable goalscorer, he scored 108 in 144 La Liga outings for Barca, winning the title three times as well as clinching the Champions League on two occasions with the Catalan giants.