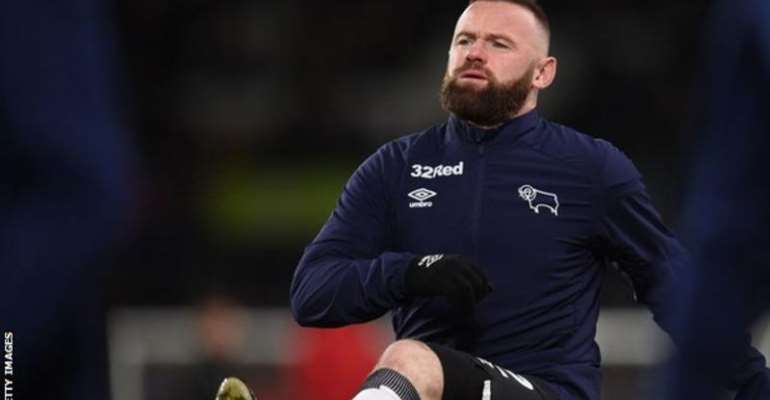 Derby striker Rooney questions why footballers are being treated like "scapegoats"

The power struggle over how Premier League footballers can financially assist in the fight against coronavirus is "a disgrace" and has players in a "no-win situation", says Wayne Rooney.

Players have been urged to do more by health secretary Matt Hancock and the Premier League proposed a 30% pay cut.

The Professional Footballers' Association says that may harm the NHS.

Derby striker Rooney says he is happy to offer support but asked: "Why are footballers suddenly the scapegoats?"

In his Sunday Times column, the 34-year-old ex-England captain added: "For the Premier League to just announce the proposal, as it has done, increases the pressure on players and in my opinion, it is now a no-win situation: if players come out and say they can't agree or are not willing to cut by 30%, even if the real reasons are that it will financially ruin some, it will be presented as 'Rich Players Refuse Pay Cut'.

"It seemed strange to me because every other decision in this process has been kept behind closed doors, but this had to be announced publicly.

"Why? It feels as if it's to shame the players - to force them into a corner where they have to pick up the bill for lost revenue."

England manager Gareth Southgate has reportedly taken a 30% pay cut, though the Football Association is yet to confirm the move.

The Premier League says it wants a 30% cut in players' wages in order to "protect employment throughout the professional game".

The PFA says the proposal would be "detrimental to our NHS" as it would equate to more than £500m in wage reductions over 12 months, and a loss in tax contributions of more than £200m to the UK government.

Derby player-coach Rooney questioned the timing of the Premier League's proposed wage cuts when top-flight captains were already in discussions as to how they could set up a fund that would go to a charitable cause, most likely the NHS.

Rooney also said the Premier League's own contribution of £20m to the NHS was "a drop in the ocean" compared to what players are being asked to give up.

"How the past few days have played out is a disgrace," added England's all-time leading goalscorer.

"I get that players are well paid and could give up money. But this should be getting done on a case-by-case basis.

"Clubs should be sitting down with each player and explaining what savings it needs to survive. Players would accept that.

"Personally, I'd have no problem with some of us paying more. I don't think that would cause any dressing room problems.

"Whatever way you look at it, we're easy targets. What gets lost is that half our wages get taken by the taxman. Money that goes to the government, money that is helping the NHS."

Rooney questioned why "big stars from other sports, who are able to avoid tax by living in places like Monaco" are not being scrutinised over the financial support they are offering in the fight against the coronavirus pandemic.

He also criticised health secretary Hancock focusing on footballers and believes big clubs do not need players to take cuts in order to survive, adding if they did then "football is in a far worse position than any of us imagined".

Rooney said he expects people to "point the finger" at him for airing his views on the pay-cut issue but wanted to "speak up" for players.

"At the moment it's almost a free-for-all: it's like the government, Premier League and sections of the media have set the players up to fall," he added.

Fellow ex-England captain Gary Lineker told BBC One's The Andrew Marr Show that footballers he had spoken to were "desperately keen" to offer help but were an "easy" target for criticism.

"Why not call on all the wealthy to try and help if they possibly can rather than just pick on footballers?" the Match of the Day presenter said.

"Nobody seems to talk about the bankers, the CEOs, huge millionaires. Are they standing up? Are they being asked to stand up? We don't know.

"The problem is how you do it. It's obviously complicated and it takes time. People are always quick to jump on the judgemental high horse, certainly when it comes to footballers but lots of them do lots of really good things and I'm sure they'll continue to do so.

"Footballers do an extraordinary amount of good in the community, lots of them will already be giving in their own silent ways and I know that plans are afoot to make their contributions to society.

"I expect an announcement to come in the next few days, the next week or so."