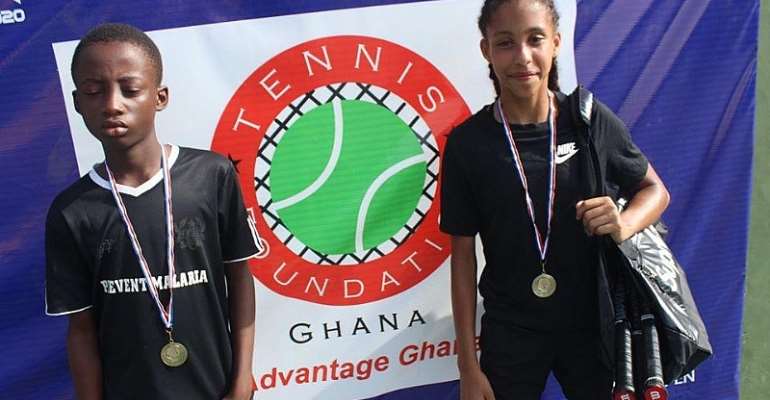 Teen sensation, Ebenezer Quaye, clinched his first title on Sunday with a resounding 6-2 win over Army Officer’s Mess Tennis Club’s Herbert Doe-Adjani, while German-based Ghanaian Akua Akoma showed her superiority over her counterpart with a 6-0 triumph over Judith Abbey at the National Tennis Centre Accra.

Ebenezer Quaye, the tournament’s number one seed announced his presence with a 4-1 win over Solomon Impraim in the round of 32 before beating Edward Otoo 4-0 in the round of 16, Ebenezer maintained his composure and ousted Julius Amarkwei 5-4(4) in the quarter-finals and also outclassing Kofi Ampadu 6-2 in the semi-finals before finishing with a 6-2 over Herbert Doe-Adjani.

In an interview with ghanatennis.org Ebenezer said, “I’m very happy to win this title; this is a dream come true for me’.

In the girls’ singles final, without dropping a game Akua Akoma proved too strong for her peers as she rallied past Joyce Adjure 4-0 in the second round after getting a bye in the first round. Akua continued her outstanding performance with a 4-0 win over Hanna Coleman in the quarter-finals. Akua again powered past Florence Lamptey in the semi-finals before outclassing Judith Abbey 6-0 in the final.

Akua thanked the organizers (Tennis Foundation Ghana) for this event and added that she will be here again for the TFG under 14 Open which is scheduled from 21 to 22 March 2020.

Mankarigu Health Center temporarily closed down after attack...
28 minutes ago