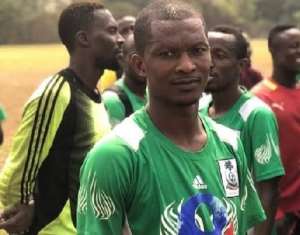 Adjei, who joined King Faisal at the beginning of the season, cited gross disrespect to him by Alhaji Abdul Gruzah - President of King Faisal, as the main reason for his decision.

The veteran midfield dynamo joined embattled Faisal barely three months ago, following what the Management describes as a ‘friendly contract’ between the two, but this came to an abrupt end on Thursday.

However, the player who was brought in to lift the team from the doldrums of the 18-club Ghana Premier League (GPL), has in recent times, been on collision course with the Founder and President of Faisal, Alhaji Karim Gruzah.

“I have my dignity and personality to protect, therefore, I want to leave the club peacefully,” a disappointed Nii Adjei told the GNA Sports in an interview.

Alhaji Grunsah soon after the Club’s matchday 14 defeat to Cape Coast Ebusua Dwarfs over the weekend, went public and took a swipe at the veteran midfielder, accusing him of instigating the playing body against the Management.

The President also called the said player names, saying the Club could no longer tolerate that sort of ‘indiscipline’- a development which Nii Adjei did not take kindly.

Kumasi-based Faisal after fourteen weeks of action could be found at the last position of the 2019/2020 GPL log on six points.

At the time of filing this report, a crisis meeting was underway to convince the aggrieved player to rescind his decision.