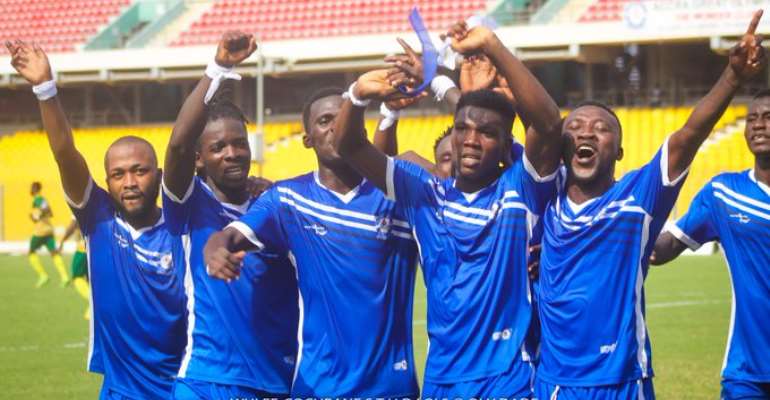 Accra Great Olympics have taunted their rivals Hearts of Oak ahead of their 'Accra Derby' on Wednesday evening.

The two clubs will renew their rivalry at the Accra Sports Stadium in Ghana Premier League match week 14 fixtures.

Both teams have been far from good since the 2019/2020 Ghanaian domestic top-flight league commenced and continues to struggle even after playing 13 matches.

Hearts, on the other hand, have not been comfortable at the Accra Sports Stadium this season and their 1-1 drawn game against Inter Allies seems to have dumped their spirit ahead of this game.

Coach Annor Walker will be without his inspiration skipper, Gladson Awako, who sustained an arm injury during their league game against Ebusua Dwarfs last Saturday.

Ahead of Wednesday's clash, Great Olympics have fired shots that they are the real owners of the capital.

They tweeted: True Landlords of the capital!... not those lotto kiosk colour boys.

Olympics have poor record against Accra Hearts of Oak and the last time they met in the 2016/17 league, the Dade Boys succumbed to the dictates of their rivals in a 1-2 defeat back-to-back.

Apart from that, Olympics have never beaten their city rivals in their last 10 outings with the Phobians holding a record of seven wins with the remainder three ending in a draw.

Frederick Samena has been tasked to officiate the contest, he will be assisted by the Pascal Mawusi and Kofi Nyarko Bakae while Philip Arthur Forson.

The ticket prices for the derby have also been announced. The tickets for the Popular Stand and the Center Line will go for Gh₵10 respectively while the Lower VIP will be sold at Gh₵20.00.

Hearts of Oak hosts Great Olympics at the Accra Sports Stadium on Wednesday, March 11 at 7:00 pm.