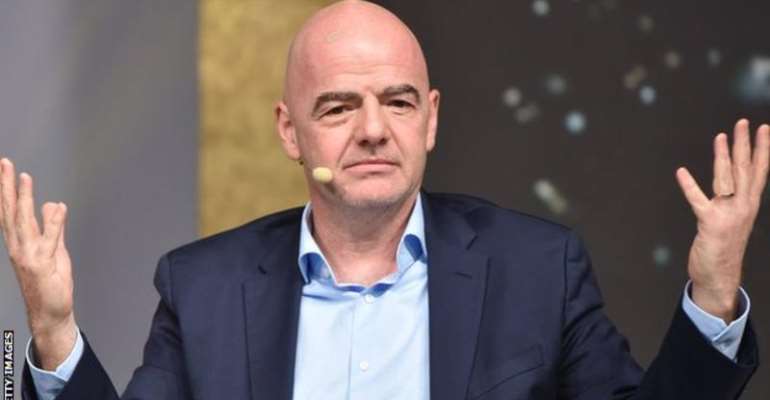 Fifa president Gianni Infantino has not ruled out next month's international fixtures being postponed as the spread of coronavirus continues.

"People's health is much more important than any game," said Infantino.

Players have contacted unions "out of fear" and are concerned about games in "high-risk environments", says Fifpro.

On Friday, there were a number of other coronavirus-related developments affecting football:

Infantino says he is hopeful next month's international fixtures will go ahead but added: "I wouldn't exclude anything at this moment.

"That's why we have to look at the situation and hope that it will decrease rather than increase. At the moment it looks like it is still increasing.

"If games have to be postponed or played without spectators until it is over, then we have to go through that."

Fifpro, a global union with 65 affiliated national associations, says there have been talks between "various football stakeholders" about rescheduling international dates.

In the Euro 2020 qualifiers on 26 March and 31 March, Scotland play Israel, Northern Ireland face Bosnia and Herzegovina, while the Republic of Ireland meet Slovakia.

A number of World Cup qualifying matches in the Asian Football Confederation, including Australia's home match against Kuwait and Hong Kong's trip to Iran, are also set to be played at the end of March.

China's home qualifier against the Maldives has already been moved to Thailand and is set to be played behind closed doors.

Five Italian Serie A matches will be played behind closed doors this weekend - including Juventus' match at home to Inter Milan.

"Fifpro is concerned for the safety of players who may be exposed to the coronavirus and the danger of football acting as a vehicle to spread disease," said the global union, which works on behalf of more than 65,000 players.

"Players have contacted our member unions asking for assistance out of fear they could be made to perform in high-risk environments.

"While we understand the inconvenience this causes worldwide, the Covid-19 outbreak is bigger than football, and we applaud the willingness of competition organisers to take firm action in this delicate period."

Tottenham forward Son, 27, travelled to Seoul for surgery on a fractured arm earlier this month.

Tottenham say he will follow government advice and stay indoors as a precaution upon his return.

Newcastle manager Steve Bruce said his squad had a "ritual" of shaking hands with each other every morning.

"We've stopped that on the advice of the doctor," he said.

"Thankfully, we've got a superb doctor here and he will keep us informed of what we have to do.

"We're like everybody else, we're glued to the TV for where it's going to go next and let's hope it doesn't get any worse in this country."

West Ham boss David Moyes said: "After consulting with the medical team, we have supplied all the players with hand gel to keep with them.

"We've also agreed to no shaking hands at the moment, just fist bumps. If we score tomorrow, of course they'll be able to celebrate."

More than 80,000 people have been infected by the virus, which originated in China but has since spread to more than 50 countries, resulting in nearly 2,800 deaths.

Three more cases of the virus were confirmed in the UK on Friday, bringing the total number in the country to 19.

The Premier League says clubs are following the same NHS and government advice issued to all businesses and venues which are used by large numbers of people.

There is currently no suggestion or guidance to take any additional measures, though the body says clubs are free to do so where deemed necessary.

Arsenal have introduced extra checks for media attending Saturday's news conference at the club's training ground, while Everton have contacted all staff informing them of the latest government guidelines.

Spanish La Liga side Valencia have cancelled "all meetings or public gatherings in enclosed spaces that present risk to players, coaching staff and club staff" after the first confirmed cases of coronavirus in the city.

Other major sporting events, including Six Nations rugby and the Chinese Grand Prix, have also been postponed because of the outbreak.