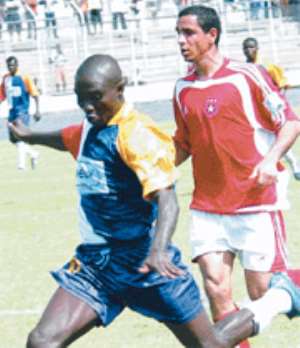 Conscious of the pedigree of Etoile du Sahel of Tunisia, especially in their encounters with Accra Hearts of Oak in competitive continental matches, Phobia fans started murmuring as soon as the final whistle went in their match last Saturday.

To the fans, the 1-0 victory of Hearts over Etoile du Sahel in their CAF Champions League first leg match at Obuasi was not enough, taking into consideration the begging chances that Hearts squandered in the second half.

According to the fans, Hearts should have won by a big goal margin by utilizing the chances that came their way to make the second leg a mere formality, but the players woefully failed to do what mattered most in soccer — planting the ball in the net at the least opportunity.

As they trooped out the Obuasi Len Clay Stadium, they lamented the performance of their players, praying that the boys would put up a splendid performance in Tunisia in two weeks time to secure a place in the money zone of the CAF Champions League.

However, unknown to the fans most of the players who featured for Hearts were on the injury list, with most of them featuring just to make up the number.

Head Coach, Oti Akenten who disclosed this to the Graphic Sports in a post-match interview said, “we played with a depleted side because most of my boys who were eligible to feature for us were injured”.

He said under normal circumstances, Stanley Afedzi, a midfielder, should not have played in defence but because there was no one to play in defence “ I was forced to use Afedzi in defence”, stressing that “Michael Donkor, Jojo Bossman and Eric Nyarko were also injured but I just asked them to wear jerseys to make up the number”.

He said they would let medical experts and physiotherapists work on some of the players, hoping that they would recover in time to join their colleagues in the battle proper in Tunisia and deliver to the satisfaction of the fans.

Mr Oti Akenten promised that notwithstanding the narrow win of Hearts of Oak, “we will surely qualify to enter the money zone of the competition to prove that Ghanaian clubs are very good in continental competitions”.

“God is the best physician and I know that He will heal my boys in time to put them in the best of shapes before we meet our opponents in two weeks time”, he said confidently, stressing that “the 1-0 victory will spur us on to deliver in the second leg”.

He admitted that his opponents were very good “but they adopted a strategy to draw with Hearts so they packed their defence and midfield to frustrate my boys, but it would be a different strategy altogether when we meet in Tunisia in two weeks time”.

On the performance of the players, especially in the second half when they were able to penetrate the tight defence of the Tunisians in rapid succession but failed to score, Mr Oti Akenten said it proved the technical expertise of the technical bench of Accra Hearts of Oak.

“While it was our duty as technical men to adopt a better strategy to cage our opponents, the onus rested on the players to take their chances to make victory certain,” he said, adding that “we created the scoring chances in the second half because we adopted a better strategy but unfortunately we could not make use of them”.

He said the players should be encouraged to boost their confidence to ensure that they take their chances well when the two sides meet in Tunisia.

“The 1-0 win should not dampen the spirits of our fans because the battle has just started. We are invading Tunisia in two weeks time to make sure that we qualify to play in the money zone of the CAF Champions League to prove that in Ghana we have very good clubs,” he stressed, adding “we are now psyching the boys to boost their confidence to enable them play.